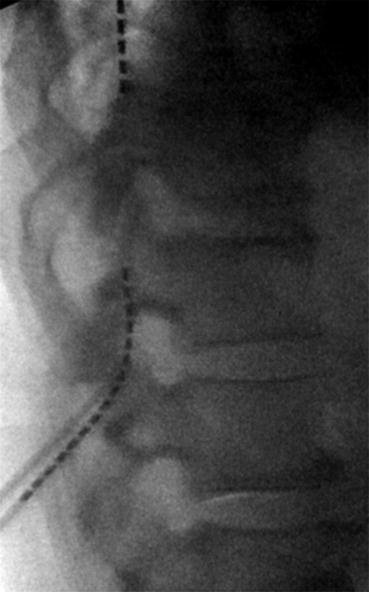 In 2011 a surgical paddle-type lead was developed that could also be placed percutaneously [5]. Although the exact mechanisms are unknown, it is hypothesized that stimulation applied to the dorsal horn affects local neurophysiologic properties at the level of the neurotransmitters, promoting suppression of neuronal hyperexcitability, modification of sympathetic tone, as well as an inhibition of orthodromic transmission of stimuli via an antidromic response [6–8].

Advancements in Neuromodulation have led to more efficient stimulation with safer trial and permanent implant techniques. Despite these enhancements, SCS is not without complications. Although uncommon, complications from spinal cord stimulators are secondary to technical limitations, biological circumstances, or, rarely, a combination of the two [9]. According to a literature review performed in 2004 [9], 27% of complications resulting from SCS implantation in 3679 patients over a 20-year period were of technical malfunction, 87% of which correlated to issues with leads. The most common complication observed postoperatively after stimulator implantation was lead migration with a rate of between 11 and 13.2% [9].
Lead movement is most commonly secondary to issues with anchoring techniques that have failed to maintain the posterior epidural lead location. Migration generally occurs in two patterns: vertical translation or horizontal shifts. For it to occur, both directional and tactile forces placed on the electrode must exceed the strength of the anchoring force. Many factors contribute to the anchoring forces placed on the leads including suture strength, technique, and placement. Other factors that play an integral part in the occurrence of lead migration involve the type of tissue used during the anchoring process, the angle and trajectory of the leads into the epidural space, areas of mobility in which the leads traverse, and the chosen area of placement of the hardware that comprises the remainder of the stimulator [10]. Historically, lead migration was more common with the percutaneous approach versus the laminectomy technique for SCS implantation, as well as a higher incidence when the battery is placed in the abdominal area versus placement in the gluteal region. Kumar and colleagues [10], however, concluded in a study that the more proximally the implanted pulse generator (IPG) is placed to the actual site of insertion of the lead wires, the lower the risk of lead migration. This observation likely reflects the increase in stress placed on the lead wires between the site of anchor and the IPG when these components are separated by a greater distance. This separation increases more during extension and flexion of the spine. Furthermore, in 2006, Rosenow and colleagues [11] found that lead migration rates in a cohort of 289 patients were actually higher in those that had undergone a surgical laminotomy for SCS implantation. Migration rates are also noted to be higher in cervical leads, occurring nearly twice as often as leads placed in the lower thoracic region, reflecting the variability in mobility of differing segments of the spine [10].

The dorsal column fibers of the spinal cord are organized in a lamellated fashion with a caudal to rostral pattern of sensation correlating with medial to lateral structures of the dorsal column [11]. The goal location for lead placement is in the posterior epidural space for direct stimulation to the dorsal column of the spinal cord or the dorsal nerve roots, without stimulation to the anterior motor horns. Stimulation directed at this section of the spinal cord aims to produce purely sensory changes, in the form of paresthesias, and thereby avoids any motor abnormalities. When appropriate placement is achieved, paresthesias produced should cover a pattern both ipsilaterally and caudally to the level of the lead. Muscle contractions, warm sensations, burning, or abnormal paresthesias after SCS placement likely indicates that stimulation is being applied external to the dorsal columns. Depending on the abnormalities observed as well as an in-depth understanding of spinal cord anatomy, the location of aberrant stimulation can be localized, allowing for a faster time between diagnosis of malfunction and corrective measures.
When lead migration or aberrant procedural placement occurs, the various spinal tracts can be activated during stimulation depending on spatial occupancy within the epidural space and proximity to traversing tracts. In the instance of corticospinal tract stimulation, patients present with complaints of muscle contractions, typically seen with lower frequencies than 60–90 Hz, both ipsilaterally and caudally to the level at which the stimulation is applied. Similarly, ventral stimulation of the spinal cord, including the ventral roots, would provoke muscle contractions ipsilateral and at the level of stimulation. If leads were to overlay autonomic pathways, patients could experience warmth and burning ipsilaterally and caudally to level of stimulation. Energy applied to the dorsal root fibers, seen more laterally in the spinal canal, would produce ipsilateral paresthesias; however, differing from dorsal column stimulation in that root activation is seen at lower stimulation potency. In the rare instance that the spinothalamic tracts were to be activated via lead position, warmth, pain, and burning would be observed in a contralateral and caudal fashion from the level of stimulation [11].

Both trial and permanent percutaneous placement involve the introduction of the SCS leads, via fluoroscopic guidance, into the epidural space using a standard epidural needle or curved epidural needle. The leads are directed into the posterior or dorsal paramedian epidural space with skin point entry usually two levels below the midline epidural entrance. They are then threaded to a designated anatomic location, generally involving the region of the low thoracic cord, ranging between the T8 and T10 segments, for lower back and radicular leg pain. For patients who experience upper extremity symptoms, including cervicalgia, cervical leads can be placed between C2 and C7 depending on the predominant area of pain. When the desired level is reached in the permanent implant, an incision is made at the needle site, cutting down to the supraspinous fascia. Other surgeons will make a single midline incision initially, dissecting to the supraspinous process, placing the epidural needle into this accessed area. Regardless of the technique chosen, leads are then anchored as close as possible to the fascia entry site using nonabsorbable sutures, ideally with the tip of the anchor penetrating into the fascia.
Newer surgical techniques and technologies have allowed for decreased rates of lead migration due to technological advancements. A few measures used to prevent lead movement include the implementation of a 30° angle for needle entry, placement of the epidural needle at a minimum of two vertebral bodies distal to the target, using the spinal ligaments, most commonly the supraspinous fascia, as the point of anchor, and placing a strain relief loop at the site of lead entry to the ligament as well as at the generator site [13] have led to improved results. Mironer and colleagues [1] found that “midline anchoring” techniques utilizing the plica mediana dorsalis as the anchor point resulted in a decrease in lead migration from 23 to 6% after trial insertion and from 24 to 7% after implantation versus the standard technique. Since the advent and usage of multipolar and multichannel electrode systems, a significant decline in incidence of migration has been noted over more than a decade. Kumar et al. noted a 5% decline in the incidence of surgical revision in a 10-year case series, siting the variability of coverage that multichannel electrodes offered compared to monopolar systems as well as increased success of recapture with multichannel systems [9]. North et al. reported that in cases using simple bipolar leads, surgical revision rates were as high as 23%, while only 16% of those utilizing multichannel programmable devices required revision [14]. Furthermore, placing two separate leads increases success of recapture in instances of migration by expanding the number of viable electrodes as well as stimulation coverage area.
In recent years, new anchoring devices have been created in the hopes of replacing suturing methods for lead stabilization. The devices have been touted as both increasing anchoring forces as well as decreasing procedural times compared to standard methods of fixation [15]. One commercialized anchor produced by Boston Scientific Corporation (Valencia, CA, USA) reported a holding force of 2.9 times greater than that of their conventional silicone suture sleeve in cadaveric testing. Furthermore, they reported a decreased procedure time by an average of 34% [16]. A study performed by Bowman et al. found that these novel semi-automated devices provided more secure fixation of SCS leads when compared to standard suturing techniques in excised caprine spine [17]. However, before these devices can be adopted into standard of practice, further studies are required to assess their benefit in human subjects.
Only gold members can continue reading. Log In or Register to continue