Aside from the classic distribution and elimination mechanisms that regulate opioid PK, it is now clear that CNS drug levels are governed by more than just these well-known processes. The BBB is much more than a physical barrier as, along with the gut mucosa, these membranes contain various influx and efflux transporters that modulate opioid entry through a dynamic energy-dependent gating process [3, 4]. Membrane transporters, such as P-glycoprotein (P-gp), are multispecific transport proteins that not only mediate the BBB (and gut) passage of numerous endogenous compounds but are important in determining the onset, magnitude, and duration of the (PD) effects of opioids and other centrally acting drugs. P-gp appears to have developed as a primary mechanism to protect the body from exogenous toxins and transports substances/drugs, against a concentration gradient, from the brain, gonads, or other organs into the gut, urine, or bile [5]. For oral analgesics, P-gp has an important “gatekeeper” function (eliminating drug into the gut lumen) and should be considered as part of the “first-pass effect,” especially when administered with a P-gp inducer.
In summary, opioids can have widely disparate PK/PD based on route of administration, physicochemical properties, variability of metabolic pathways, production of active metabolites, and whether the parent drug is a substrate for membrane transporters, such as P-gp [6]. Opioids with active metabolites that are also P-gp substrates, e.g., morphine glucuronides, will have far greater variability in analgesic effect and potential for unanticipated adverse events, particularly late-onset sedation and respiratory depression [7]. Therefore, the anticipated onset, magnitude, and duration of opioid analgesic effects can become quite complex.

The true correlation to opioid PD is clearly the local CNS effector site drug concentration and not the venous drug concentration that is classically used to determine PK parameters, such as C max (peak venous plasma concentration), T max (time to C max), and t ½ (elimination half-life). Furthermore, simply changing the route of delivery of an opioid from IV to transmucosal, for example, can dramatically affect even these classic PK parameters. The previous discussion of opioid distribution, elimination, and membrane transporters suggests that there is a need for a better understanding of effector site PK as opposed to venous plasma PK. As systemic opioids must enter the CNS to be effective, plasma concentration plotted against effect generates a reverse or counterclockwise hysteresis relationship due to the time delay in crossing in and out of the BBB (Fig. 53.1) [8]. Initially as the plasma concentration rises, the analgesic response magnitude is low as the drug moves from systemic circulation to the effector site. As the CNS concentration rises (even as plasma concentration begins to fall), analgesia (or the likelihood of a side effect) increases. CNS levels (and pain relief) eventually decline with the elimination of drug from the body by metabolism and clearance mechanisms. 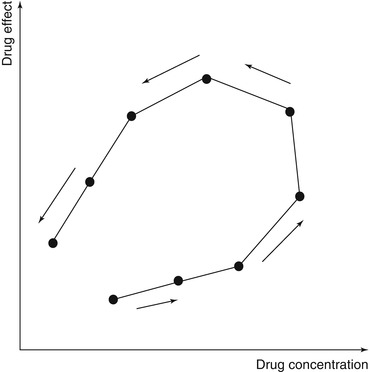 The Importance of t ½ke0 and CST½

When discussing effector site PK, the plasma/effector site equilibration half-life (t ½ke0) and the context sensitive halftime (CST½) are two parameters that are more reflective of the PD of a specific opioid and route of administration than traditional PK parameters.
The t ½ke0 is experimentally determined by measuring an objective sign of opioid CNS effect (EEG or pupillometry are two popular methods) and comparing the kinetics of this effect with the measured drug concentration in the venous plasma, thereby determining the time required for “equilibration” between the effector site and the plasma concentration. For opioids that are highly lipophilic and are not efflux transporter substrates, such as fentanyl and sufentanil, this equilibration occurs rapidly as these drugs rapidly escape out of the aqueous plasma environment into the lipid bilayers of the CNS [9]. For hydrophilic drugs that have limited ability to transit into lipophilic environments and, in addition, are substrates for efflux transporters, such as morphine, this equilibration can take hours, and the equilibration of active metabolites, such as morphine-6-glucuronide (M6G), can take even longer (Table 53.2). So it is easy to see that while the venous C max of IV bolus morphine may be reached in a minute after administration, this classic PK parameter is of little benefit when determining the timing of onset of action of the drug or its peak effect.


Source: Lotsch [9]; Shafer and Flood [10]; Scott et al. [11]
The CST½ of a drug is defined as the time from C max to 50 % of C max following discontinuation of drug administration. Route of delivery (e.g., IV vs. transmucosal) and duration of the delivery (bolus vs. infusion) are key determining variables for CST½. Similar to t ½ke0 being a more accurate measure of onset of opioid effect, the CST½ is a more accurate measure of offset of the opioid effect rather than the traditional elimination half-life or t½. While total body drug stores may take hours to be eliminated following IV delivery of an opioid, reflecting a long t½, the plasma concentration of the drug, which reflects the concentration presented to the CNS, may be dramatically reduced in less than an hour after administration. Therefore, by measuring the time to 50 % reduction of circulating drug levels instead of total body stores, the CST½ is a more accurate reflection of the offset of effect of the drug. This, of course, can be complicated by extremely delayed t ½ke0 drugs such as morphine.
Only gold members can continue reading. Log In or Register to continue