The indications for blockade include:

•   For acute and subacute pain

For refractory adductor spasms that interferes with acute rehabilitation

For chronic hip pain with a local anesthetic block, with or without steroids, or using radiofrequency lesioning

For adductor spasticity as a neurolytic block. Kwon suggests that a selective blockade of the anterior branch may be sufficient to permit abduction more than 45 degrees.

•   Another indication is to prevent the obturator reflex during transurethral resection of the bladder (TURB). The reflex is due to the stimulation through the bladder of the obturator nerve, resulting in sudden thigh adduction that can cause bladder perforation. Bilateral blocks have to be performed to be effective.

•   The obturator nerve is a mixed sensory and motor branch of the lumbar plexus and derives from the anterior divisions of the ventral rami of L2, L3, and L4 (Figure 63-1). 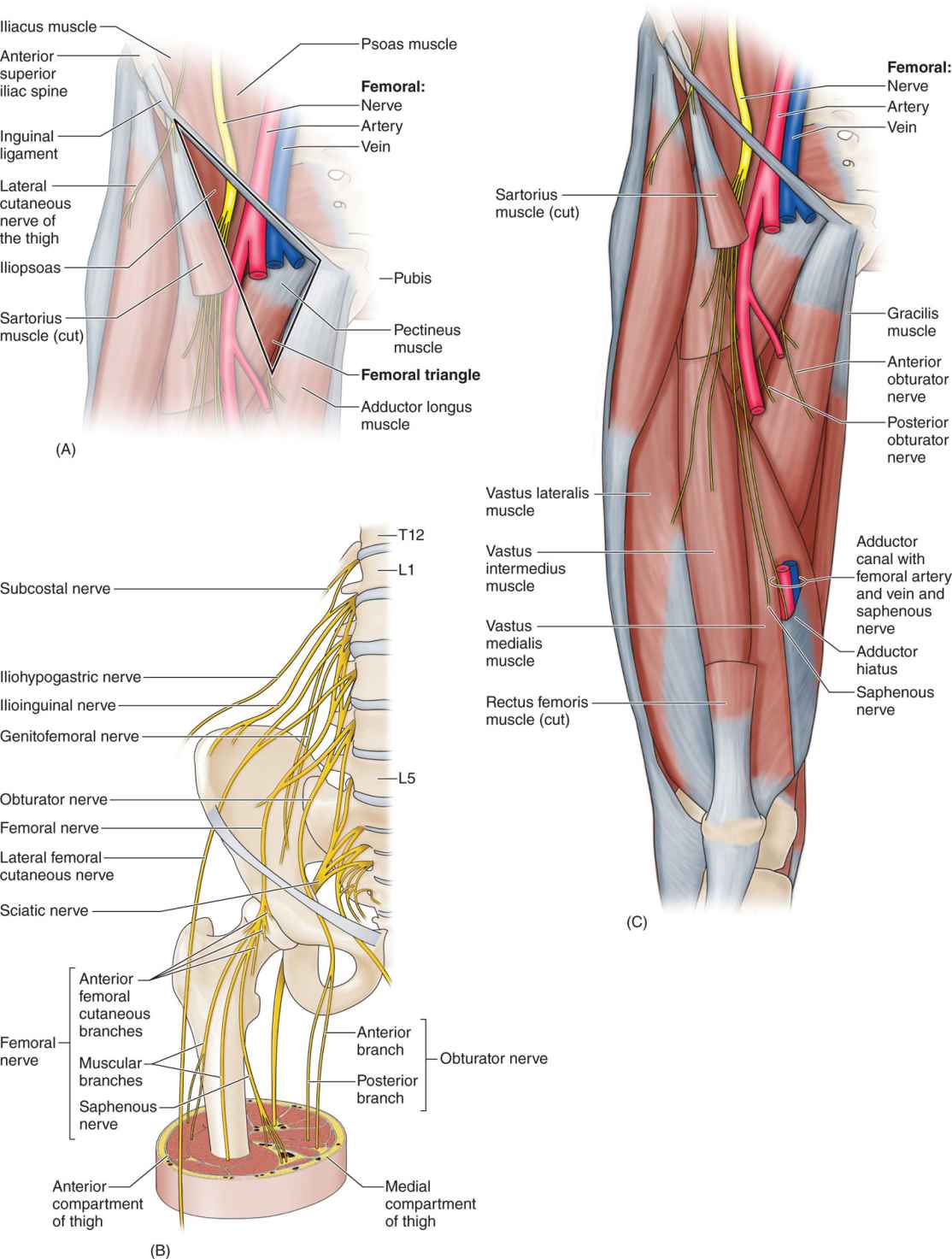 Figure 63-1. Anatomy of the obturator nerve.

•   It typically emerges from the medial border of the psoas muscle at the level of the pelvic brim, and divides in the obturator canal into anterior and posterior branches (Figure 63-2), although variations are common with a multiple branching pattern.

•   The anterior branch gives an articular branch to the hip joint (Figure 63-3), provides motor innervation of the adductor brevis, adductor longus, gracilis, and occasionally the pectineus, and innervates a variable area of skin; most references show an area in the medial aspect of the thigh, while others suggest a more distal location at the level of the knee.

Figure 63-3. Contribution of the obturator nerve to the sensory innervation of the hip.

•   The posterior branch provides motor innervation to the adductor magnus, obturator externus, and occasionally the adductor brevis (in that case, this muscle is not innervated by the anterior branch), and ends with an articular branch to the knee joint.

•   The obturator nerve can be blocked with the other nerves of the lumbar plexus using the psoas compartment approach. Despite initial claims, a perivascular inguinal block (Winnie’s “3-in-1 block”) only rarely reaches the obturator nerve, as demonstrated by Macalou et al.

•   The block can be performed using external anatomic landmarks and neurostimulation, or using imaging guidance (fluoroscopy or ultrasound, rarely CT scan). Blockade can be performed proximally, in the obturator foramen, before nerve division, or more distally, in the proximal thigh, between the adductor muscles.

•   Inguinal lymphadenopathy (although a posterior approach would still be possible)

•   Infection in the injection area or in the perineum

•   Hematoma at the needle insertion site

•   Contrast allergy if a fluoroscopic technique is used and contrast will be administered, although premedication is feasible

•   Informed consent should be obtained after thorough discussion of risks and benefits.

•   Examination of the area for infection or hematoma.

•   The patient should be able to lie supine.

•   IV access can be considered for sedation and treatment of a possible vasovagal reaction. Vital sign monitoring can include ECG, NIBP, heart rate, and pulse oximetry.

•   Resuscitation equipment and 20% intralipid can be available to treat local anesthetic toxicity.

•   Position the patient supine, with the lower extremity slightly abducted, and in slight external rotation. Optimal positioning might be difficult to achieve in a spastic patient.

•   Protect the genitalia and the perineum from the antiseptic solution.

•   22-gauge 100-mm spinal needle and fluoroscopy equipment, according to the technique used

•   0.0625% to 0.25% bupivacaine or 1% to 2% lidocaine or another suitable local anesthetic for nerve blockade; phenol for neurolytic block (3% phenol if only a sensory block is desired, 6% phenol to obtain a motor block as well).

Labat’s original technique is uncomfortable for the patient, as it requires bone contact and multiple redirecting of the needle, and the needle may enter the pelvis if inserted too far. Wassef described an elegant interadductor technique, but the technique described by Choquet is preferred, as it is more distal and thus minimizes the risk of vascular injury and of entering the pelvis. One has to be aware, however, that because the nerve is blocked more distally, the branches to the hip joint might not be blocked.

•   The insertion of the tendon of the long adductor muscle on the pubic tubercle is identified, using extreme leg abduction (Figure 63-4). 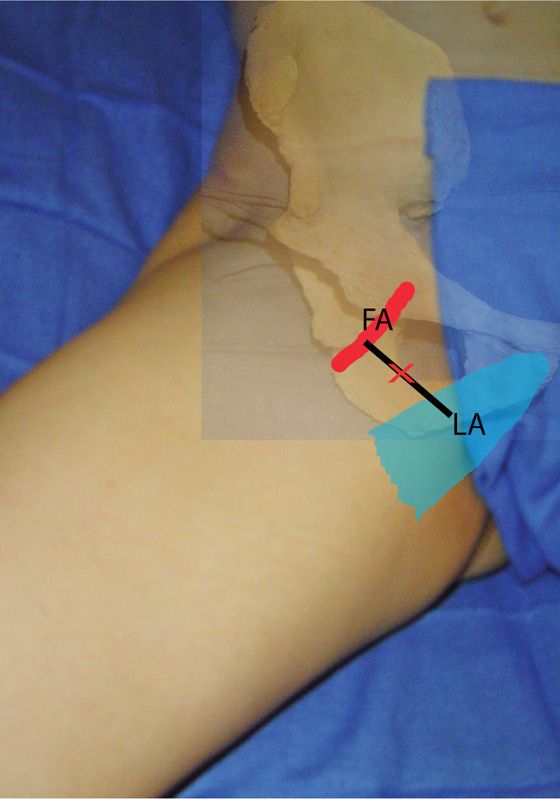 •   A line is drawn, following the inguinal crease, from the pulse of the femoral artery to the tendon of the long adductor muscle.

•   The needle is inserted at the midpoint of this line and directed cephalad at a 30-degree angle.

•   After 3 to 5 cm in an average size patient, contractions of the long adductor and gracilis muscles can be detected on the posterior and medial aspect of the thigh.

•   After the current is decreased to less than 0.4 mA and the response is preserved, 5 to 7 mL of local anesthetic are injected after aspiration.

•   The needle is then redirected slightly laterally and inserted 0.5 to 1.5 cm deeper until a response from the adductor magnus muscle is obtained on the posteromedial aspect of the thigh.

•   Again, the current is decreased to less than 0.4 mA and 5 to 7 mL of local anesthetic can be injected. Occasionally, the obturator nerve divides more distally, and both motor responses may be observed with a single stimulation.

•   Both branches can then be blocked with a single injection.

•   With the patient supine and the lower extremity slightly abducted, a low-frequency ultrasound probe is placed just lateral to the tendon of the adductor longus muscle, perpendicular to the axis of the thigh.

•   The muscles are identified by scanning between proximal and distal positions. The anterior and posterior branches of the obturator nerve have typically a flat and hyperechoic (ie, white) appearance (Figure 63-5). 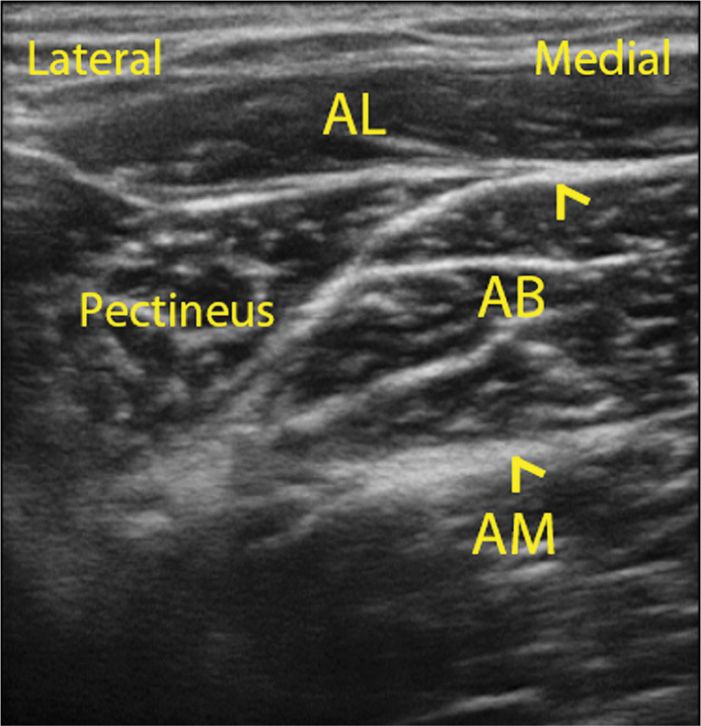 •   It is useful to track the nerves up and down to confirm that they are indeed continuous structures. Color Doppler can be used to locate the obturator artery or its branches.

•   The block is often performed using an out-of-plane technique, as the area is small and a needle introduced in-plane would have to go through the adductor longus tendon medially, or might threaten the femoral vessel immediately lateral to the ultrasound probe, but careful technique makes the in-plane approach possible, especially if a probe with a small footprint (“hockey-stick”) is used.

•   Following negative aspiration for blood, 5 to 7 mL of local anesthetic are deposited near both nerves, although some authors recommend injecting 7 to 10 mL near one branch to block both branches by diffusion.

Akkaya described a more proximal approach, comparable to Labat’s approach but without the need for bone contact. The ultrasound probe is positioned parasagittally medial to the area where the femoral vein is visualized, at the level of the inguinal ligament.

•   A 22-gauge needle is inserted in-plane from the distal side of the probe.

•   Neurostimulation is used to confirm proximity of the needle tip with the obturator nerve (adductor response with a current of >0.5 mA).

•   10 mL of local anesthetic is then slowly injected while monitoring solution spread under real-time ultrasound.

•   The patient is positioned supine with the leg slightly abducted.

•   A 22-gauge 100-mm needle is inserted at a point 1.5 cm caudal and lateral to the pubic tubercle, perpendicular to the skin, after raising a skin wheal with lidocaine.

•   The needle is advanced until bone (the inferior pubic ramus) is contacted.

•   It is then slightly withdrawn, redirected cranially and laterally, and advanced 2 to 3 cm in order to enter the obturator canal.

•   Fluoroscopy is used to confirm the needle position (Figure 63-6), and 3 mL of contrast is injected for further confirmation. 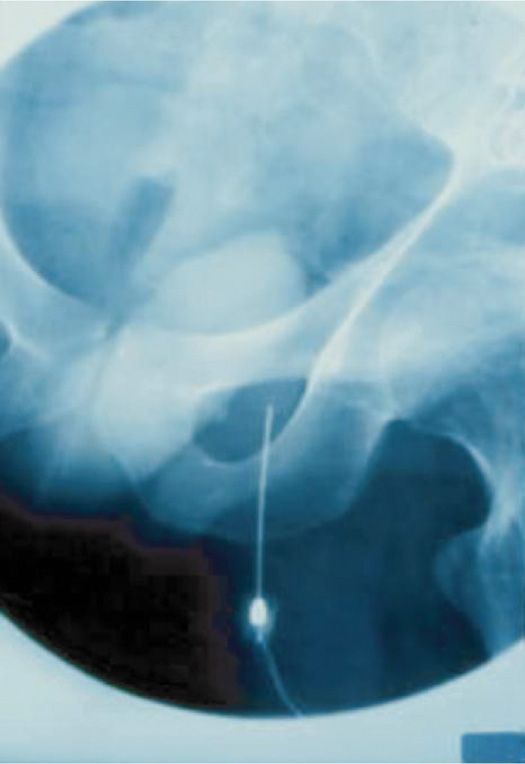 •   If a stimulating needle is used, neurostimulation can be used to elicit contraction of the adductors, or to reproduce the pain sensation.

•   Anterior and posterior CT-guided techniques have also been described.

•   The patient must be warned of the risk of gait or standing instability and fall, as adductor muscle tone will be significantly decreased.

•   Depending on the local anesthetic or phenol concentration injected, the duration of the blockade will vary from a few hours to up to a year.

As this block is used only infrequently, no complication has, to our knowledge, been reported in the literature. This is not in itself an assurance that complications cannot happen.

•   A misdirected needle could pass over the superior pubic ramus and penetrate the pelvic cavity, perforating the bladder, rectum, or spermatic cord.

•   The obturator vessels travel with the nerve in the obturator canal; intravascular injection and hematoma formation are possible.

•   The corona mortis, a retropubic anastomosis between the external iliac (or deep epigastric) and obturator arteries, is present in 10% to 30% of patients; bleeding secondary to laceration of the corona mortis could be difficult to control.

•   As with other peripheral nerve blocks, nerve trauma or local anesthetic toxicity is also possible.

•   In 8% to 30% of patients, an accessory obturator nerve arises from L3 and L4, travels with the femoral nerve and gives branches to the hip joint.

•   Adductor spasm persisting after an obturator block can be due to this accessory nerve. However, among the adductor muscles, the femoral nerve usually innervates the pectineus, and a portion of the adductor magnus is innervated by the sciatic nerve.

•   These might be sufficient to explain a persistent adductor tone following a well-conducted obturator nerve block.