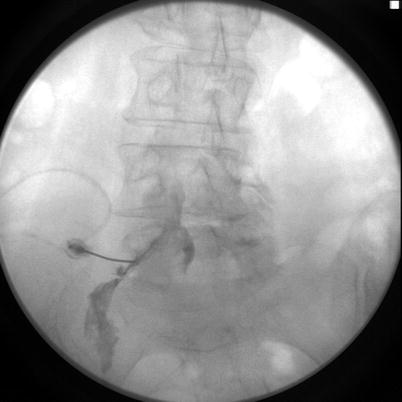 At this point, her differential diagnosis was broad and confounded by her preexisting right-sided weakness and dementia. The differential included weakness along her nerve root secondary to local anesthetic, nerve injury, accidental dural puncture, intrathecal injection, epidural hematoma, anterior spinal cord syndrome, and communication breakdown from dementia. The patient was admitted to the intensive care unit for frequent neurological exams, spine imaging, coagulation tests, and neurosurgical evaluation.
Given her preexisting weakness of her right lower extremity, it was unclear whether the new weakness was unilateral or bilateral. Thus, emergent MRI of the lumbar spine was conducted, which revealed normal anatomy. There was no evidence of either epidural hematoma or spinal cord ischemia. The patient’s symptoms began to resolve within 2 h, and she was discharged home the following day with a diagnosis of weakness due to nerve root injection and baseline preexisting weakness in her right lower extremity.

Intervertebral disc pathology is a common cause of back pain and is often treated with an epidural steroid injection. Steroid can be injected into the epidural space via the interlaminar, caudal, or transforaminal approach. Transforaminal epidural steroid injection (TFESI) is unique among the techniques in that it allows for the delivery of medication into the anterior epidural region [1]. It has been demonstrated that lower dosages of medication are effective when using the TFESI approach [2]. While the reduction of amount of medication injected decreases some risk, the transforaminal approach to the epidural space comes with its own unique risks. These include minor complications like headache and nausea or major complications such as motor weakness, nerve injury, accidental dural puncture, intrathecal injection, discitis, paraplegia, and death.

15.2.2 Anatomical Congestion in the Foramen