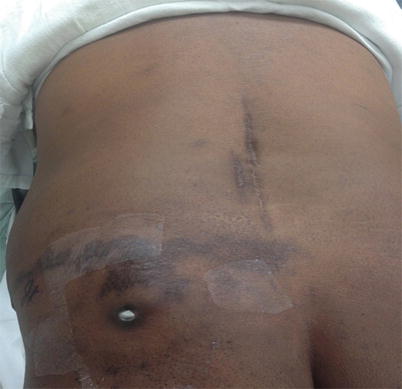 Extrusion of the IPG immediately before explantation. As seen in this image, the original implant was toward the superior border of the gluteal area, possible pressurized during long drives as a truck driver and as a consequence of weight loss. Image from personal library

The area was cleaned with an antiseptic wash and topical antibiotics, and a course of oral cephalosporin was prescribed. The decision was made to remove the SCS system due to the risk of infection. Two days later, the entire SCS unit was removed without any complications. The hardware was sent to pathology and did not grow any bacteria. He completed a 10-day course of an oral cephalosporin.
Over the next 2 weeks, his pain gradually returned in the back and legs. It was decided to temporarily manage his pain with physical therapy, conservative modalities (TENS unit, back brace), and medication until a new SCS can be implanted. Three months after the removal of the first SCS, a decision was made to perform another SCS trial with the plan to implant in the right gluteal region. Patient was instructed about the risks associated with excessive weight loss which he acknowledged. In addition a smaller, rechargeable IPG was also used. The trial and implantation both took place without any complications and relieved his pain back to his original pain level when he had the initial SCS.

The rate of implantations and utilization of spinal cord stimulators for pain is ever increasing. Battery and lead extrusion are rare complications that can be seen after spinal cord stimulation implantation. Extrusion refers to a component of the spinal cord stimulator protruding outside of the skin. It is usually preceded by skin erosion in which there is skin breakdown allowing the component to extrude. Typically, an extrusion occurs after superficial lead placement. The actual incidence of this occurring in the neuromodulation literature is unknown, but there is up to 1% incidence in cardiac pacemakers which uses similar components (leads/battery) to the SCS [1]. The sources used for this chapter are gathered from both the cardiac electrophysiology and neuromodulation literature as the complication of extrusion can occur in both in a similar manner.

An extrusion of the implantable pulse generator (IPG) can be due to a number of factors (Table 37.1) [2]. First, an infection at the site can lead to skin erosion leading to an extrusion. Wound infections that involve the IPG, incision site, or tunneled area occur in up to 4% of patients [3]. Infections generally occur in the acute phase after implantation from unsterile techniques. The administration of prophylactic antibiotics during the implantation can diminish the risk of infection. The clinical manifestation of infection can be with mild systemic signs or symptoms (leukocytosis, fever, elevated sedimentation rate, or C-reactive protein) or more severe with fulminant life-threatening sepsis. Second, in the absence of infection, pressure necrosis of the soft tissue and skin can lead to an extrusion. Pressure necrosis is influenced by the size and design of the IPG. There are certain IPGs that have bigger dimensions and different architecture design that may lead to local tension on the dermis. Older versions and non-rechargeable IPGs tend to be larger and may have sharp edges which may theoretically cause more local tension. Third, technical skill with which the pocket is created is important. The pocket in which an IPG is placed is vital in the prevention of an extrusion occurring as inadequate size or a paucity of subcutaneous tissue can contribute to local tension. A small pocket may lead to poor wound closure, pressure on the tissue, and eventual erosion. A large pocket size can potentially lead to flipping of the device, tissue irritation causing pain, or a seroma in the remaining pocket space. The pocket should be created on the surface of the gluteal muscle with enough overlying soft tissue and placed at a depth of 3 cm as superficial pockets can lead to an erosion. To ensure appropriate depth placement, telemetry and impedance testing can be done in the pocket prior to closure. Fourth, abrasive action exerted on the skin from external agents such as an occupational hazard (i.e., truck driver from prolonged sitting) can lead to extrusion [4]. The pocket location is important as it should not be placed where a long duration of pressure can be applied such as sitting for prolonged periods; therefore, the best placement of the pocket is generally in the superior gluteal area and in some instances in the abdomen. Next, excessive weight loss can cause the subcutaneous tissue to diminish leading to tension on the skin [5]. Lastly, elderly patients are at an increased risk of an erosion due to subcutaneous tissue fat loss and tissue fragility that occurs with aging. As patients age, the skin becomes more fragile causing loss of the protective fat layer.

Etiology of IPG extrusion
Only gold members can continue reading. Log In or Register to continue