The patient agreed to a brachial plexus block via an axillary approach after a detailed discussion of the risks, benefits, and alternatives of regional anesthesia.
After standard American Society of Anesthesiologists-recommended monitors were applied, intravenous midazolam (1 mg) and fentanyl (50 mcg) were administered. The left axilla was identified, and the area around the axillary artery was prepped and draped for the procedure.
After application of an electric nerve stimulator, a 22-gauge, 2-inch B-bevel echogenic needle was inserted superior to the palpated axillary artery. When median nerve activity was identified by wrist flexion at 0.32 mA, 20 mL of 0.5% bupivacaine with 1:200,000 epinephrine was injected with negative aspiration every 5 mL over a period of 90 s. No adverse cardiovascular effects (increase in heart rate by more than 20%) were observed during the injection. At the conclusion of the block, the patient became nonresponsive. Initial small fluttering of her eyelids progressed in 30 s to a generalized tonic-clonic seizure.
Resuscitation measures were initiated with 100% oxygen by bag mask ventilation. Additional intravenous midazolam (2 mg) did not stop the seizure activity, and the patient continued tonic-clonic movements for another 2 min when 50 mg propofol abruptly interrupted the event. The patient was nonresponsive but hemodynamically stable with baseline blood pressure, heart rate, and rhythm for approximately 5 min. At that point, ventricular tachycardia progressed to ventricular fibrillation.
The possible differential diagnoses considered were acute cardiac ischemia, local anesthetic allergic reaction, and local anesthetic systemic toxicity (LAST). Neither acute ischemia nor allergic reaction was seriously considered given the timeline of the event.
Suspicion of LAST led to quick action with immediate attention to airway, breathing, and circulation. In the absence of lipid emulsion, an advanced cardiac life support was initiated.
The patient’s trachea was intubated with a 7.0 endotracheal tube (grade I view), and chest compressions were started. The patient received a total of 3 mg epinephrine, 40 units vasopressin, and 3 rounds of defibrillation. Quality chest compressions were maintained continuously for 10 min. Spontaneous circulation and sinus rhythm returned with intermittent premature ventricular complexes. The patient was hemodynamically stable yet remained unconscious.
In attempts to preserve her neurological function, therapeutic hypothermia was initiated by placing ice bags in the axilla, groin, and neck. Cool fluid was administered through the right internal jugular triple-lumen catheter. These measures quickly achieved core body temperature values of 34.0 °C measured upon arrival to cardiac intensive care unit, 15 min later. The patient remained unconscious without a shivering response. No sedation or neuromuscular blocking agents were given. Four hours after arrest, the patient began to move her extremities and was able to follow commands. The therapeutic hypothermia protocol was discontinued. The patient’s trachea was extubated the next morning on 2 L nasal cannula with oxygen saturation of 99%. The patient was discharged home with full neurologic recovery 4 days after the event with no sequelae. She returned 3 weeks later for wrist surgery under general anesthesia without complications (Fig. 8.1). 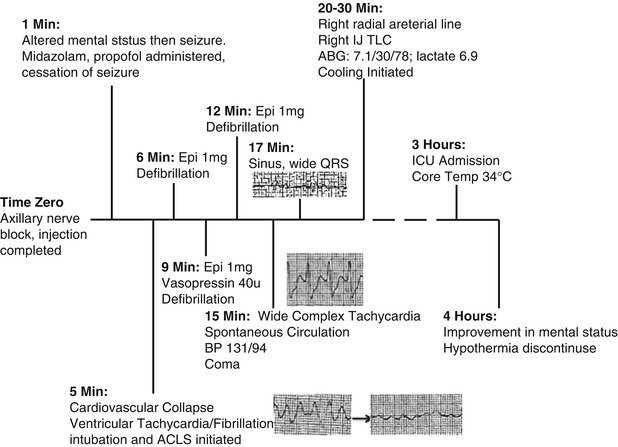 Timeline of events with cardiac rhythm strips , from personal library

Regional anesthesia is an effective and important tool for various surgical procedures. Devastating cardiovascular and neurologic complications result if concentrated local anesthetic is not injected correctly. Intravascular injection of local anesthetics during a peripheral nerve block is associated with LAST that progresses to seizures and cardiovascular collapse.
Treatment with intravenous lipid resuscitation (bolus and infusion) after local anesthetic-induced cardiac collapse that is refractory to protocols for advanced cardiac life support has been well described [1, 2]. Before it was introduced into clinical practice, lipid emulsion therapy in animal models seemed to decrease mortality [3] and improve myocardial function [4].
There is minimal evidence for preservation of neurological function and cardiac function after LAST. In the absence of readily available intravenous lipid emulsion, LAST can be fatal. Hypothermia decreases morbidity after return of spontaneous circulation in patients with cardiac arrest [5], making this therapy attractive for prevention of neurologic dysfunction in witnessed cardiac collapse.

In 1803, Russian surgeons covered patients in snow to induce hypothermia as a resuscitative method. In 1812, Napoleon’s physicians used hypothermia to preserve injured limbs and as an anesthetic adjuvant during amputations. In 1937, neurosurgeon Temple Fay cooled his patients to 32 °C to prevent tumor cells from multiplying [6]. He called this technique “general refrigeration” and proved that malignant cells are actually more susceptible to cold than normal ones, opening the door for this technique in cancer palliation.
Therapeutic hypothermia improved perioperative outcomes during cardiac and neurological surgery over the next 20 years. Between 1960 and 1990, the technique was partially abandoned because of arrhythmogenicity and less clearance of staphylococcal bacteria.
Therapeutic hypothermia reduces oxygen requirements and thus preserves cardiac and neurological function. In the 2000s, the American Heart Association and European Resuscitation Council recommended therapeutic hypothermia as a treatment for out-of-hospital cardiac arrest.

Accidental intravascular injection of local anesthetic during regional anesthesia techniques and its consequence, LAST, have been amply described. There are many methods to minimize the risks. Frequent negative aspirations during local anesthetic injection, dose restrictions, and epinephrine additives in local anesthetics have limited the risk of vascular uptake. In the early 1980s, stimulator needles assisted in detecting proximity to targeted nerves. Ultrasound-guided blocks have become ubiquitous in regional anesthetics for visualizing anatomy and local anesthetic spread in real time. In our patient with weakened connective tissue from long-term use of glucocorticoids and with documented underlying mixed connective tissue disease, intravascular uptake was possible even with the use of ultrasound imaging.
Only gold members can continue reading. Log In or Register to continue