Patients generally seek help only if their sunburn is severe. There will be a history of extended exposure to sunlight or to an artificial source of ultraviolet radiation, such as a sunlamp. Patients at highest risk typically have fair skin, blue eyes, and red or blond hair. The burns will be accompanied by intense pain, and the patient will not be able to tolerate anything touching the skin. Most exposure is limited to sun-exposed areas of the body (Figure 179-1, A and B). There may be systemic complaints of “sun poisoning” that include nausea, vomiting, chills, and fever. The affected areas are erythematous and are accompanied by mild edema. Erythema develops after 2 to 6 hours and peaks at 12 to 24 hours. The more severe the burn, the earlier it will appear and the more likely that it will progress to edema and blistering. Signs and symptoms usually resolve over 4 to 7 days, often with skin scaling and peeling (Figure 179-2).

Figure 179-1 A and B, Sunburn on the upper back. Note the sharp cut-off at the line of clothing (A) and the relative sparing further up the neck because of shielding by the hair. (From White G, Cox N: Diseases of the skin, ed 2. St Louis, 2006, Mosby.) 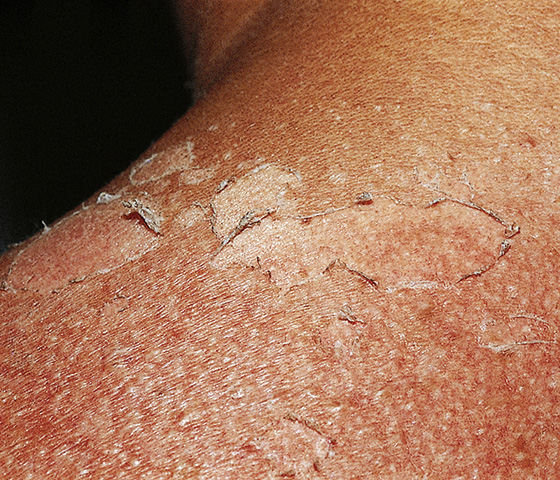 Figure 179-2 Sunburn typically causes peeling as it resolves, even if frank blistering has not been an early feature. (From White G, Cox N: Diseases of the skin, ed 2. St Louis, 2006, Mosby.)

Inquire whether the patient is using a photosensitizing drug (e.g., tetracyclines, thiazides, sulfonamides, phenothiazines, sulfonylurea hypoglycemic agents, griseofulvin, and vitamin B6); if so, have her discontinue its use and avoid the sun for at least 3 weeks.

Have the patient apply cool compresses of skim milk and water or Burow solution (Domeboro Powder Packets, two packets in 1 pint of water) as often as desired to relieve pain. This is the most comforting therapy. Cool baths or showers will also help.

If there is no contraindication, nonsteroidal anti-inflammatory drugs (NSAIDs), such as ibuprofen (Motrin), 400 mg q6h, or naproxen (Naprosyn), 500 mg bid, will help reduce pain and inflammation. When pain is severe, prescribe narcotics, such as hydrocodone or oxycodone.

Suggest an emollient, such as Lubriderm or cold cream for topical treatment. The patient may also be helped by a topical steroid spray, such as dexamethasone (Decaspray), although some investigators have not found topical steroids to be of any significant value. Most recommend not using them unless there is coexistent contact dermatitis. Products with Aloe vera are increasingly popular.

With a more severe burn or when a photosensitizing drug is involved, especially with the systemic symptoms of “sun poisoning,” prescribe a short course of systemic steroids (50 to 100 mg of prednisone [1 mg/kg] qd × 3 days) to reduce inflammation, swelling, pain, and itching. Add a mild sedative and antipruritic, such as hydroxyzine (Vistaril), 50 mg qid.

Instruct the patient to avoid the sun for a minimum of 3 weeks.

Do not allow the patient to use over-the-counter (OTC) sunburn medications that contain local anesthetics (benzocaine, dibucaine, or lidocaine). They are usually ineffective or provide only very transient relief. In addition, there is the potential hazard of sensitizing the patient to these ingredients.

Do not trouble the patient with unnecessary burn dressings. These wounds have a very low probability of becoming infected, and most cases resolve spontaneously with no significant sequelae. Treatment should be directed at making the patient as comfortable as possible.

Do not forget that sunburns may trigger recurrence of herpes simplex, lupus, porphyria, and other cutaneous disorders. (Easy sunburning during infancy may indicate a serious underlying disease, such as porphyria or xeroderma pigmentosum.)

Sunburn is an acute cutaneous inflammatory reaction that follows excessive exposure of the skin to ultraviolet radiation (UVR).

UVR from the sun that reaches the earth is divided into UVB (290 to 320 nm) and UVA (320 to 400 nm). The ratio of UVA to UVB is 20:1. UVR is strongest between 10 AM and 4 PM. The acute response of human skin to UVB irradiation includes erythema, edema, and pigment darkening, followed by delayed tanning, thickening of the epidermis and dermis, and synthesis of vitamin D; chronic UVB effects are photoaging, immunosuppression, and photocarcinogenesis. UVB-induced erythema occurs approximately 4 hours after exposure, peaks around 8 to 24 hours, and fades over a day or so; in fair-skinned and older individuals, UVB erythema may be persistent, sometimes lasting for weeks. To produce the same erythemal response, approximately 1000 times more UVA dose is needed compared with UVB. UVA is more efficient in inducing tanning, whereas UVB is more efficient in inducing erythema and sunburn.

Once the signs and symptoms of sunburn are present, no treatment, including systemic corticosteroids, has unequivocally been shown to be effective. Prevention is the most effective therapy for sunburn.

Seeking shade and minimizing sun exposure during peak UVR times (10 AM to 4 PM) is recommended. This should be combined with the use of appropriate clothing, a wide-brimmed hat, sunglasses, and broad-spectrum sunscreen to achieve the optimal protection.

Clothing is an excellent photoprotectant. UV protectiveness of fabrics is expressed as “UV protection factor” (UPF), which is analogous to the SPF of sunscreens. Adequate UV protection is provided by a UPF greater than 30. Denim provides a UPF of 1700. Typical summer cotton T-shirts provide a UPF of 5 to 9; when wet, the UPF decreases to only 3 to 4. The introduction of UV-cutting agent (UVCA) compounds, which increase the absorption of UV radiation by the fabrics to which they are applied, has increased the ability of cotton and cotton blend fabrics to protect against the most harmful wavelengths of UV radiation.

SPF-15 sunscreen can filter out 94% of UVB radiation, and SPF-30 sunscreen provides greater than 97% protection. It is known that, in actual use, most people apply less than the amount used in testing (2 mg/cm2). The overall median application thickness in general is only 0.5 mg/cm2. Most sunscreen activity failure is caused by inadequate application and by less-than-adequate frequency of reapplication. As a rule of thumb, sunscreens provide only 33% of the protection value stated on a label, because of this lack of proper compliance. Sunscreen on the skin may shed easily with rubbing, sweating, or water immersion. It has been recommended that sunscreen be applied 20 minutes before sun exposure and be reapplied every 2 to 3 hours or after swimming or sweating. Sensitivity to the sun increases on the second day of exposure; therefore a higher SPF sunscreen is important for individuals who are expected to have multiday sun exposure. In general, use of a sunscreen with an SPF of 30 is sufficient. Approximately 1 ounce is enough for each application for an average-sized adult in an average-sized swimsuit.

Sunscreen use alone, no matter how substantive or durable the product, should not be trusted to prevent all of the possible harmful effects of sun exposure. For example, most sunscreens offer less protection against UVA, which may be more important in causing melanoma than UVB. Multiple studies demonstrate a major impact of UVA in skin photodamage and emphasize the need for a broad protection covering the entire solar UV spectrum. When they are trusted, it is important to read and follow the label directions on these sunscreen products.

The U.S. Food and Drug Administration (FDA) has recently approved a sunscreen containing ecamsule (Mexoryl), which is more protective against the deeper penetrating UVA than any other sunscreen ingredient. Mexoryl SX has been demonstrated to play a central beneficial role in broad-spectrum sunscreen formulations. Its efficacy has been brought out in numerous clinical trials.

Several preparations combine avobenzone, which blocks UVA, with UVB blocking agents. They are sold by numerous companies, and patients should be directed to check labels to ensure the presence of a UVA blocking component. Mexoryl SX was developed for use in combination with avobenzone and octocrylene for broad-spectrum protection. In this formulation, octocrylene acts to stabilize avobenzone. Available in Europe and Canada since 1993, Mexoryl SX is the first new photostable short-UVA filter in a sunscreen formula to be approved by the U.S. FDA and is now available in the United States in the new sunscreen product Anthelios SX. Anthelios SX is an SPF15 lightweight moisturizing cream that is intended for daily use. The product protects against both UVB and UVA. Fragrance-free and allergy tested, it is suitable for sensitive skin and is oil-free and noncomedogenic.

Photosensitivity reactions occur often with drug ingestion in combination with exposure to the sun. The reaction occurs in sun-exposed areas, primarily of the face, arms, and chest. It resembles sunburn and is usually not pruritic (Figures 179-3 and 179-4). Reactions are divided into phototoxic and photoallergic. Phototoxic reactions are more common and are not truly allergic, because previous exposure is not necessary. The severity of the reaction is drug- and UVA-dose dependent and usually occurs within hours. Photoallergic reactions represent delayed-type hypersensitivity and require previous exposure to a drug plus UVA exposure. This reaction is typically pruritic and eczematous and occurs within 1 to 2 days of exposure. 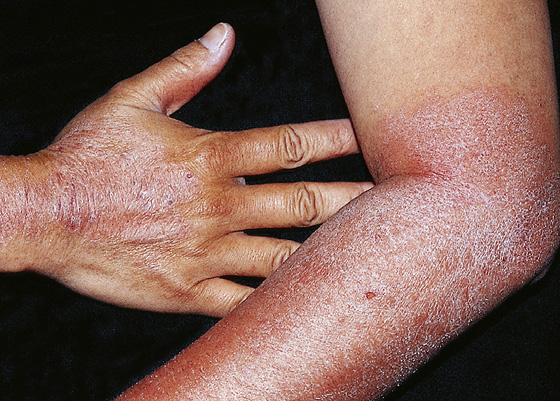 Figure 179-3 Photodermatitis showing a typical distribution pattern. There is a cut-off from short sleeves, and relative sparing of the ulnar side of the hand and distal fingers. (From White G, Cox N: Diseases of the skin, ed 2. St Louis, 2006, Mosby.) 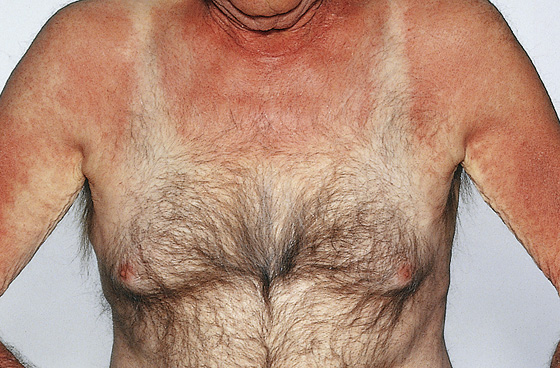