The patient has caught himself on a sharp splinter (usually wooden) and either cannot grasp it, has broken it trying to remove it, or has found that it is too large and painful to remove. The history may be somewhat obscure. On examination, a puncture wound should be found with a tightly embedded sliver that may or may not be palpable over its entire length (Figure 153-1, A). There may only be a puncture wound without a clearly visible or palpable foreign body. 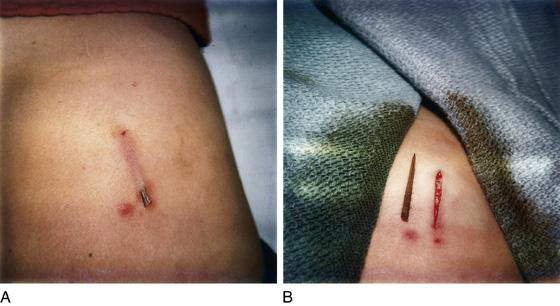 Figure 153-1 Wooden splinter in child’s buttock before (A) and after (B) removal.

Obtain a careful history. Find out if the patient has any foreign body sensation. Be suspicious of all puncture wounds (especially on the foot) that have been caused by a wooden object.

If it is unclear whether a wooden foreign body is beneath the skin, order a high-resolution ultrasound (US) study using a linear array transducer that focuses in the near field-of-view. A 7.5- or 10-MHz probe is used to search for small superficial objects, whereas a 5.0-MHz probe is recommended for larger, deeper objects (Figure 153-2). Most of the literature regarding US detection of foreign bodies involves superficial objects, and there is a concern that sensitivity is reduced with deeper foreign bodies, as well as with lower frequency probes. CT scanning can be used to detect deep wooden foreign bodies that are less than 24 hours old when ultrasonography has failed; radiation and cost are considerable with this modality. MRI is the most costly imaging study, but it is the most sensitive. 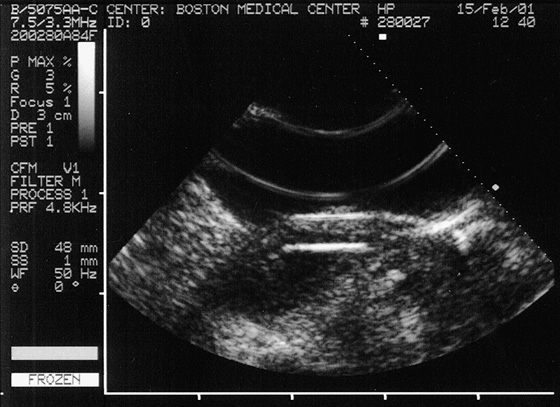 Figure 153-2 Ultrasonogram of the hand with a wooden toothpick in the superficial soft tissue. (Courtesy A. Dewitz, MD, Boston Medical Center, Boston.)

If the sliver is visible or easily palpated, locally infiltrate with 1% lidocaine (Xylocaine) with epinephrine, and clean the skin with povidone-iodine solution. (Inserting the needle through the entrance wound will avoid the pain of a needle stick through the dermis.) With proper lighting, and using a No. 15 scalpel blade, cut down over the entire length of the sliver, completely exposing it. The sliver can now be easily lifted out and completely removed. Cleanse the open track with normal saline or 1% povidone-iodine on a gauze sponge (Figure 153-3). Débride contaminated tissue if necessary. This superficial wound (see Figure 153-1, B) can now be easily closed using wound-closure strips or tissue adhesive. Avoid sutures when possible, especially absorbable, buried sutures, because of the increased risk for infection. 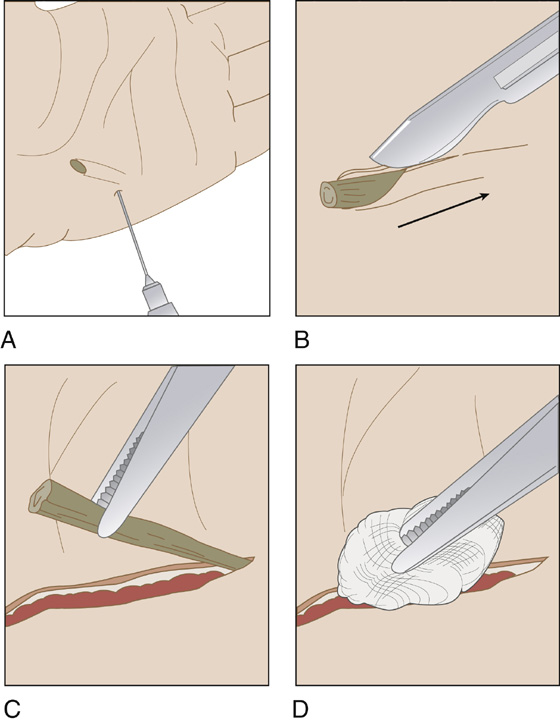 Figure 153-3 A, Inject with a local anesthetic. B, Incise down to the sliver. C, Lift the sliver out with forceps. D, Clean the wound track with a wet gauze sponge.

A more vertical splinter should be approached in the same manner, but the incision will be straight down along the length of the sliver as deep as possible, thereby releasing the entire foreign body from the surrounding tissue. Be careful not to incise any important anatomic structures, such as nerves, vessels, or tendons.

When a sliver is lost under the dermis but is still palpable, anesthetize the skin in the usual manner, but first establish a bloodless field. Inform the patient that it is often difficult to find such a splinter under the skin (“like a needle in a haystack”) and that you will limit your search to about 10 to 15 minutes because further exploration may cause harm.

Attempt to stabilize the palpable foreign body with the fingers of your nondominant hand while you cut down on the most superficial point of the sliver with a No. 15 scalpel blade until it is exposed. Always be cognizant of potential anatomic structures that must be avoided. When the splinter is exposed, grab it with plain forceps and release it from the surrounding tissue by cutting down on as much of its length as necessary to free it up.

When a sliver is lost under the dermis and cannot be palpated or located using this technique, it can be managed in one of two ways. Small organic foreign bodies that are not embedded in the deep tissues of the hand or foot (or any other high-risk location) and clean inert foreign bodies (such as small metallic fragments) can be left in place and treated expectantly. They will either heal over without consequence or, as with most organic foreign bodies, form an abscess that can be drained, thereby releasing the foreign body. These patients should initially be placed on an antibiotic, such as cephalexin (Keflex), and fully informed of the risks, as well as being included in the decision-making process.

Alternatively, these patients can have the foreign body removed by a clinician who is skilled in ultrasound-guided techniques.

Patients who have larger organic foreign bodies or foreign bodies located in high-risk areas or patients who are at high risk for infectious complications (e.g., diabetes, peripheral vascular disease, other immunocompromised condition) must have these foreign bodies removed as soon as possible using the ultrasound-guided technique.

Even after the foreign body has been found and removed, be cautious about telling the patient that the splinter has been entirely removed. Inform him that although it appeared to you that the entire object had been removed, there is always a chance that a small undetectable fragment remains that may later cause infection.

Warn the patient about the signs of infection, and schedule a 48-hour wound check. Prophylactic antibiotics are generally not required when the sliver is thought to be completely removed.

For fine cactus spines, briars, or even multiple small splinters, use fine forceps to remove as many of these slivers as possible and then send the patient home to complete treatment. Have him apply nontoxic household glue (such as Elmer’s Glue, not Krazy Glue) with a cotton swab and top it with a single layer of gauze. Instruct him to let the glue dry and then remove the gauze and glue. The spines or briars will usually come out with the gauze.

Alternatively, he can use blackhead removal strips (e.g., Bioré) following the same directions he would use to remove blackheads.

Do not order plain radiographs unless a suspected sliver is made of glass or metal. Wooden foreign bodies are radiolucent. After approximately 1 day of absorbing water from adjacent tissue, they tend to be isodense on CT scanning as well. In addition, cactus and sea urchin spines, thorns, plastic, and aluminum all tend to be difficult to visualize on plain radiographs.

Do not try to pull the sliver out by one end unless you feel confident that the material it is composed of will not fragment or be friable. Otherwise, it is likely to break and leave a fragment behind or leave a trail of debris.

Do not try to locate a foreign body in a bloody field.

Do not make an incision across a neurovascular bundle, tendon, or other important structure.

Do not attempt to remove a deep, poorly localized foreign body. Those cases may require referral to a surgeon for removal in the operating room (OR), perhaps with fluoroscopic or ultrasound guidance.

Do not rely entirely on ultrasonography to rule out the possibility of a retained foreign body. There can be false-negative examinations. When there is a high index of suspicion that a foreign body is present, MRI is the most sensitive imaging study.

Do not be lulled into a false sense of security because the patient thinks the entire sliver has already been removed. Although a foreign body sensation is moderately specific, it is not sensitive enough to be definitive.

Wood, glass, and metallic splinters are among the most common retained foreign bodies. Most superficial splinters may be removed by the patients themselves, leaving to physicians and other clinicians only the deeper and larger splinters or retained splinters that have broken off during an attempt at removal.

The most common error in the management of soft tissue foreign bodies is failure to detect their presence. Signs and symptoms of a hidden foreign body might include sharp pain or a foreign body sensation with palpation over the puncture wound, dark discoloration beneath the skin, a palpable mass beneath the skin, or a patient’s suspicion that a foreign body is present. An organic foreign body is almost certain to create an inflammatory response and become infected if any part of it is left beneath the skin. It is for this reason, along with the fact that wooden slivers tend to be friable and may break apart during removal, that complete exposure is generally necessary before the sliver can be taken out.

There are no controlled studies that clearly identify which splinter removal technique works best under which conditions. Therefore, under certain circumstances, it may be perfectly reasonable to simply pull out a sliver without exposing it fully, as demonstrated. Of course, very small and superficial slivers can be removed by loosening them and picking them out with a No. 18-gauge needle, again avoiding the more elaborate techniques previously described.

When only the outer skin layers are involved, reassuring the patient, gently manipulating the wound, and incising the overlying epidermis with the needle can usually obviate the need for anesthesia.

If the foreign body is thought to be relatively superficial but cannot be located, explain to the patient that more harm may be caused by exploring and excising further. The splinter will be watched until it forms a “pus pocket,” thus making it more easily removed at a later time. If this procedure is followed, it should always be coordinated with a follow-up clinician. The patient should be placed on an antibiotic, such as cephalexin (Keflex), and provided with follow-up care within 48 hours. These retained foreign bodies may also become encapsulated within granulation tissue and can be removed at a much later date. The patient should be so informed.

When making an incision over a foreign body, always take the underlying anatomic structures into consideration. Never make an incision if there is any chance that a neurovascular bundle, tendon, or other important structure may be severed or incised.

When a patient returns after being treated for a puncture wound, and there is evidence of nonhealing or recurrent exacerbations of inflammation, infection, or drainage, assume that the wound still contains a foreign body, begin antibiotics, get appropriate imaging studies, and refer him for surgical consultation.