The sacroiliac joint (SIJ) is the largest axial joint in the body with an abundance of nociceptive pain fibers within the joint and surrounding ligaments. SIJ dysfunction or syndrome is pain originating in the sacroiliac joint without demonstrable anatomic lesion and is presumed to be due to a biochemical abnormality.1 Predisposing factors include conditions causing stress on the joint such as spinal deformity, previous spinal surgery, and leg length discrepancy. Symptoms of SI joint dysfunction include pain in the superior medial quadrant of the buttock, the lateral buttock, and inferior to the posterosuperior iliac spine, with radiation to the greater trochanter, upper lateral thigh, and groin (Figure 26-1).

Two types of injections have been performed for SIJ pain relief: an injection of local anesthetic or corticosteroids (or both) into the intra-articular space and the periarticular region, in particular into the posterior ligamentous structures. Both types of injection can be effective in the treatment of SIJ pain. It is still controversial as to which type of injection is more effective.

•   The SI joint is the largest axial joint in the body, also supported by a network of muscles that help to deliver regional muscular forces to the pelvic bones.

•   Dorsally there is raised median crest with irregular surface of lateral sacrum.

•   The S1 foramen too is close to PSIS and the location of S3 foramen is inferior to SIJ.

•   There are ligamentous gaps on dorsal surface that extend superolaterally (Figure 26-2).

•   The muscles, such as the gluteus maximus, piriformis and biceps femoris are functionally connected to SI joint ligaments. The sacroiliac joint is innervated at its anterior and posterior aspects.

•   Posteriorly, the joint is innervated by the lateral branches of the posterior primary ramus of the L4 to S4 dorsal rami.5,6

•   The predominant innervation is from the dorsal ramus of S1 and isolated dorsal innervations from S1-4 (Figure 26-3).

•   The anterior innervation is from the ventral rami of L5 to S2 and via branches from the sacral plexus.5 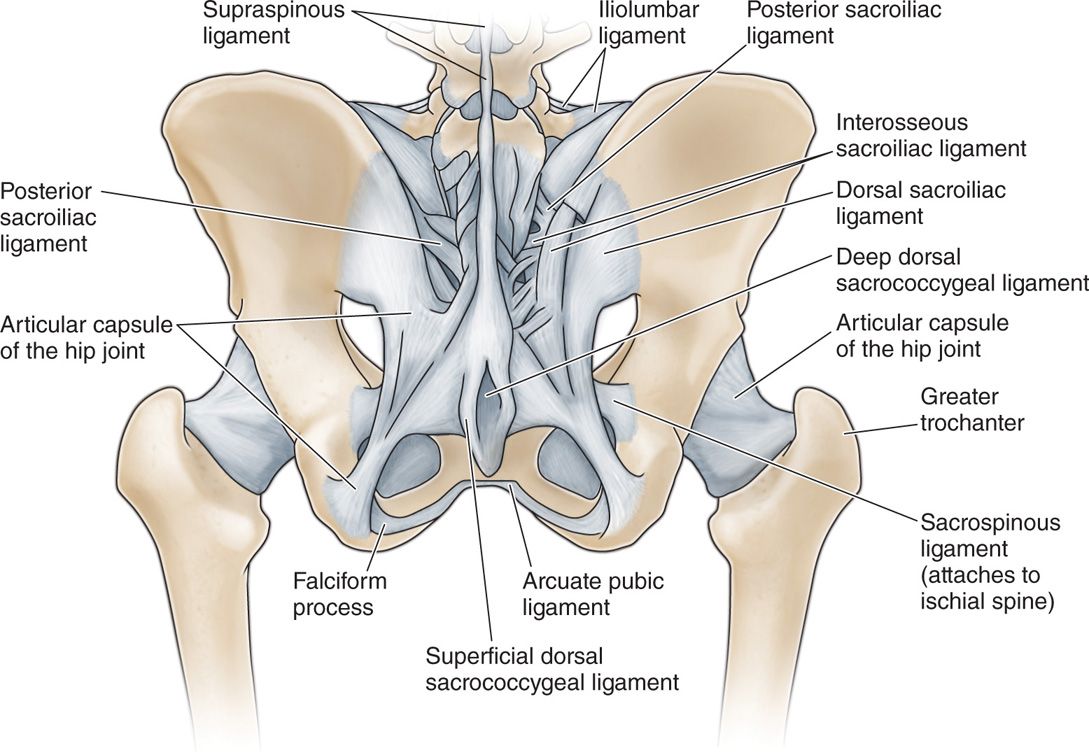 Figure 26-2. Ligaments of the sacroiliac joint. 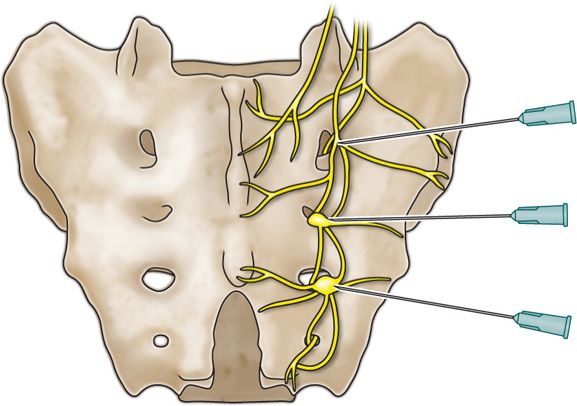 Physical examination of the patient with SI joint syndrome usually reveals tenderness over the posterior aspect of the joint and sacral sulcus with no numbness or weakness. Several provocative maneuvers can be used to stress the SI joint and elicit pain to aid in diagnosis: the FABER, Gaenslen test, Yeoman (extension) test, Gillet’s test, and posterior shear test.

•   For left SI joint test: Left leg flexed at knee and the ankle is placed in front of the right thigh above the knee. The physician places one hand over the right iliac crest, while the other hand pushes over the medial aspect of the left knee.

•   Examiner places one hand above the anterior aspect of the knee and elevates it slightly, the other hand presses downward over the crest of the ilium.

•   Comments: The hip is extended and the ipsilateral ilium is rotated. Test stresses the sacroiliac joint; it also extends the lumbar spine and stresses the femoral nerve. More specific and reliable compared to the other tests.

•   Normal sacroiliac joint: When the patient maximally flexes the hip, the PSIS moves inferior to the S2 spinous process.

•   Dysfunctional or fixed sacroiliac joint: PSIS remains at the level of the S2 spinous process or moves superior to the sacrum.

•   Palm of the examiner’s hand is placed over the posterior iliac wing. Shear thrust is directed inferiorly producing a shearing force across the sacroiliac joint.

•   Obtain a craniocaudal tilt so that the trajectory of the needle will be directed 30 to 45 degrees to enter the lower one-third part of the joint.

•   Use nonionic contrast for study of the joint and look for inadvertent vascular run-off. 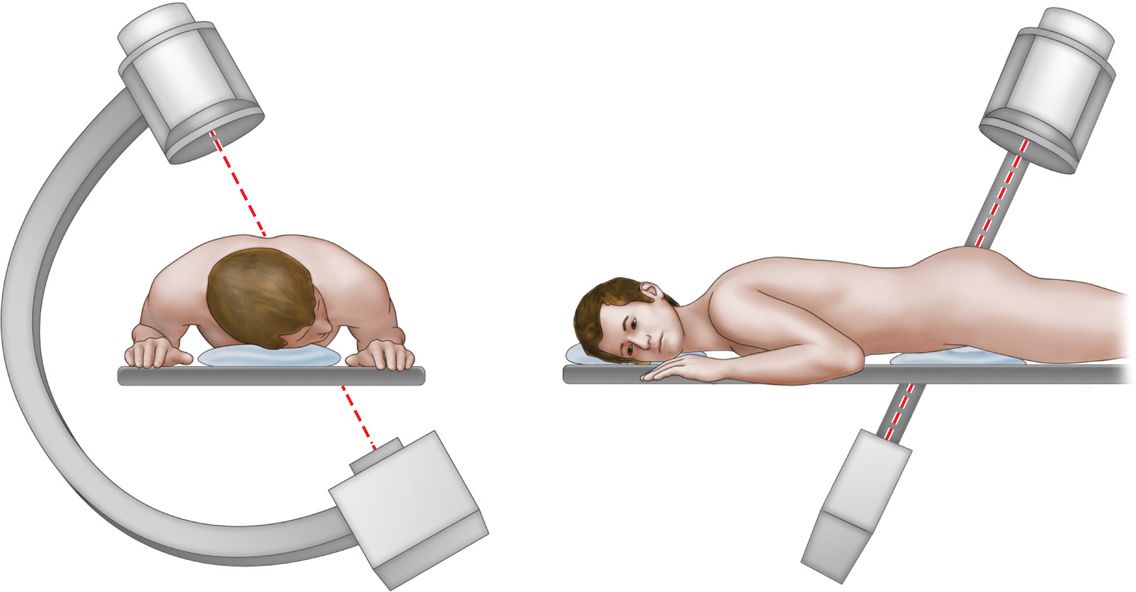 Figure 26-5. Oblique and caudal tilt of fluoroscope for ideal needle placement with trajectory to inferior one-third of sacroiliac joint.

•   Diagnostic. As a part of work-up to rule-in or rule-out a source of chronic low back pain. To address the potentially false-negative and false-positive results, repeat the diagnostic injections.

•   Therapeutic and prognostic purpose. To decide whether or not patient should be considered for a denervation procedure. Using steroid may provide long lasting pain relief by providing anti-inflammatory effect.

•   Immunocompromised patients are at high risk for infection.

•   Individualize the plan based on medical comorbidities and anticoagulants.

•   Anticoagulation—this is less of a concern than for an epidural

•   Physical examination of the area for infection, skin ulceration or necrosis, and extent of disease

•   The ability of a patient to tolerate a prone position for the injection.

•   0.25% bupivacaine or other local anesthetic

•   Fluoroscopy is tilted cranially to detect the whole SIJ line.

•   The posterior margin of SIJ can be divided into three equal sections (ie, upper, middle, and lower).

•   A 22-gauge spinal needle can be inserted in the center of each section on the sacrum.

•   Sterile prep of the area by appropriate antiseptic solution.

•   A small amount of contrast is then injected to ensure there is no intravascular spread.

•   After appropriate contrast spread in periarticular tissues without vascular run-off, a solution of steroid and local anesthetic (40-60 mg of methylprednisolone or triamcinolone with 1-2 mL of 0.5% bupivacaine or ropivacaine) is injected in divided aliquots into the top, middle, and lower regions.

•   The lateral line represents the dorsal or posterior margin of the joint.7,8

•   C-arm is angled obliquely to the contralateral side until the inferior joint space is clearly demarcated, usually 5 to 20 degrees.

•   Sterile prep of the area to be injected by appropriate antiseptic solution.

•   A 22-gauge spinal needle is advanced coaxially toward the inferior pole of the SI joint.

•   Once needle is in joint, typically a change in resistance is felt.

•   A small amount of contrast is then injected.

•   After appropriate contrast spread in the joint space and without vascular run-off, a solution of steroid and local anesthetic (40-60 mg of methylprednisolone or triamcinolone with 1-2 mL of 0.5% bupivacaine or ropivacaine) is injected (Figure 26-6).

•   Because capacity of SI joint is small, distension may exacerbate pain so maximum volume of 2 to 2.5 mL has been recommended.7,9

•   Do not inject medication under high pressure as that may disrupt the joint. 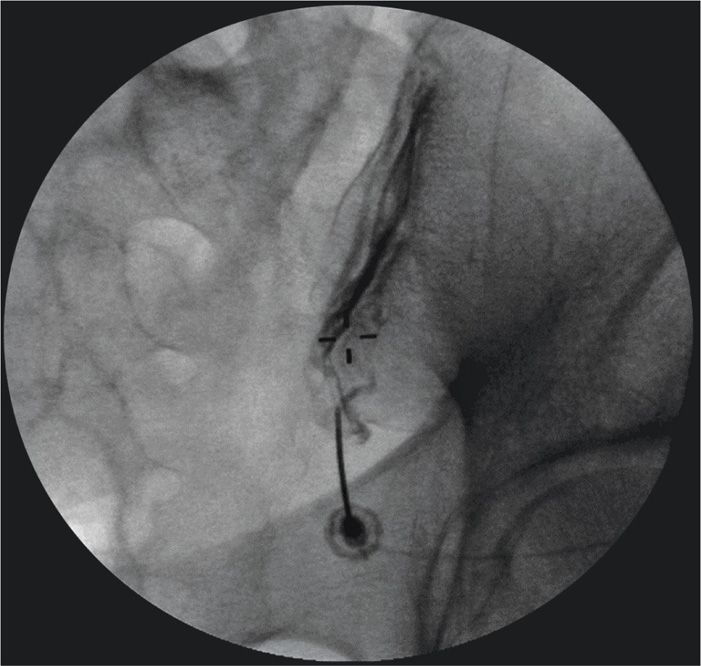 Figure 26-6. Needle placement at the inferior portion of the joint with intra-articular spread of contrast.

•   Another approach involves placement of the needle at the inferior end where the anterior and posterior joints overlap, if a lucent zone is noted there.8

20 to 30 degrees contralateral obliquity, the medial and lateral planes of the joint overlap.

Needle entry is at the most lucent zone of the joint space.

•   Allergic reaction to components of prep or solution

•   Typically a change in resistance is felt as the needle passes through the capsular issue, and the needle tip is deflected slightly as it traces the surface of the ilium.

•   A greater than 75% reduction of pain over the SI joint is considered to be a positive response.10

•   As noted, the posterior margin of the SIJ is innervated by the L5 dorsal ramus and the lateral branches of S1, S2, and S3, with possible contributions from the L4 dorsal ramus.

•   Patient positioned prone and C-arm is either positioned AP or angled slightly cephalocaudal to optimize the appearance of the sacral foramina.

•   Sterile prep of the area to be injected.

•   This corresponds to the path of the lateral branch as it travels laterally and enters the ligaments of the joint.

•   The L5 dorsal ramus is blocked at the junction of the ala and the articular process of the sacrum.

•   If L4 blockade desired, the C-arm is rotated obliquely to block the L4 dorsal ramus at the junction of the transverse process of L5 and the superior articulating process. 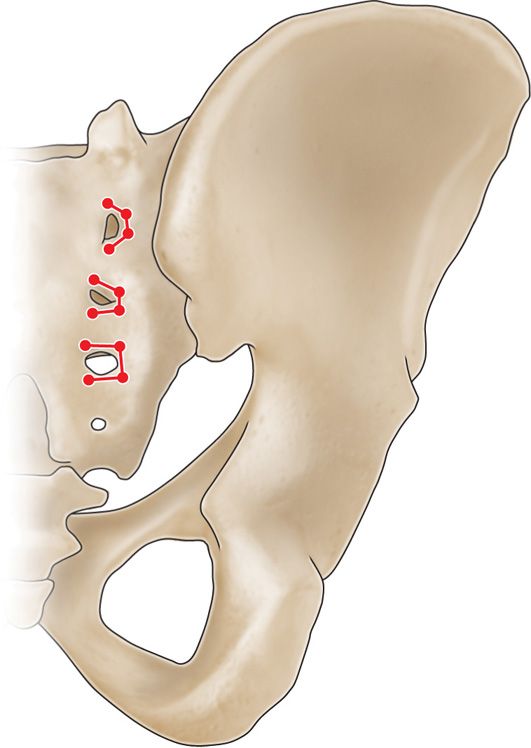 Figure 26-7. Placement of RF probes at 2 o’clock and 5 o’clock positions for denervation of sacral lateral branches from S1 to S3 foramen.

•   Can be used as diagnostic tool to predict response to radiofrequency (RF) ablation.11

RADIOFREQUENCY ABLATION OF THE SACROILIAC JOINT

•   May target the small, terminal sensory fibers at the posterior aspect of the joint itself (strip lesioning) or the nerve supply to the joint.

•   1% lidocaine, 0.5% bupivacaine or other local anesthetic

•   The joint is visualized with the C-arm as described for the SIJ injection.

•   The first RF needle (5-10 mm active tip) is inserted at the inferior margin of the joint.

•   A second RF needle is placed more cephalad, at a distance of less than 1 cm from the first probe.

•   After anesthetizing tissue with lidocaine, the RF probe is inserted and heated to 80°C for 90 seconds.

•   Successive probes are placed less than 1 cm cephalad from the previous probe and multiple lesions are created in a “leapfrog” manner as high in the joint as possible, creating a strip lesion in the posterior joint.

•   Technique has been performed with traditional thermal RF and water-cooled RF.

•   C-arm aligned for an anteroposterior image.

•   To target the L5 dorsal rami, a radiofrequency cannula placed at lateral margin of superior articular process where it meets sacral ala.

•   Because lesion created by conventional RF is smaller and is positioned along the active tip of the probe, when using conventional RF the needle trajectory must preferably be parallel to the path of the nerve to maximize the chances of the neural destruction.

•   On lateral image, the needle tip should be no further anterior than the anterior third of the superior articular process.7

•   When using cooled RF, the lesion is larger and the tip no more anterior than the midpoint of the superior articular process to avoid lesioning the segmental nerve root.12

•   Prior to lesioning, sensory nerve stimulation is applied at 50 Hz with the goal of concordant pain being reproduced below 0.6 V.

•   Motor stimulation is applied at 2 Hz at 2 V, or 3 times the sensory threshold, to verify the absence of muscle contraction in a radicular distribution.

•   Once stimulation acceptable, sites anesthetized with 0.5 mL 1% lidocaine and lesioning begins at 80°C for 90 seconds.

•   It is customary to inject 0.5 mL of a mixture of local anesthetic (eg, bupivacaine) and steroid (eg, 8 mg/mL triamcinolone) after the lesioning for postoperative analgesia and to prevent neuritis.

•   Exacerbation of symptoms due to localized muscle spasms after RF lesioning

•   It is now evident that diagnosing the SIJ pain has been difficult task.

•   The physical examination is unreliable as the physical tests are sensitive but not specific.

•   There is a poor correlation of symptoms to imaging studies.

•   Though most treatment options have not been very effective, the RF neurolysis offers a promising modality but lacks studies.

•   The neuroanatomy is an extensive, mesh-like, sensory innervation makes difficult for denervation procedures.

•   There is enormous anatomical variability that includes gender to gender, person to person, and even side to side.

•   The sacral neural foramina frequently are poorly visualized and correctly identified because of pelvic gas shadows, and may require bowel preparation for proper visualization under fluoroscopy.

•   The fluoroscopic skills are extremely important to understand the obliquity of joint orientation.

•   During pregnancy, the hormone relaxin from placenta relaxes SIJ to facilitate birth, may contribute to lower back pain but does not require any treatment as pain resolves after child birth.

•   Considered a synovial joint, although 75% joint is fibrosed.

•   In regards to strip lesioning, the posterior superior iliac spine obscures access to the superior portion of the joint, making only the lower third portion, or at most half, of the joint accessible to the lesioning.

•   Some clinicians lesion the whole posterior border of the joint under heavy sedation.

•   In RF denervation, the lesion is not created at the tip of probe but little distal, and the elliptical lesion may produce variable coagulation and gapping between probes.