Typically, patients with allergic rhinitis have clear discharge, swollen turbinates, and bluish or pale mucosa. There may be “allergic shiners”—infraorbital darkening thought to be caused by chronic venous pooling—or an “allergic salute” in children who rub their noses upward because of nasal discomfort, sometimes producing a persistent horizontal crease across the nose. Mild bilateral conjunctivitis with nonpurulent discharge is strongly suggestive of an allergic cause when it is accompanied by pruritus. The patient with a “summer cold” lasting a full month is likely to have allergic rhinitis.

Precipitating factors may be known or may be elicited from the patient. Common allergens include airborne dust-mite fecal particles, cockroach residues, animal danders (especially cats and dogs), molds, and pollens (hence the origin of the term hay fever). Vasomotor (idiopathic) rhinitis may occur in response to environmental conditions, such as changes in temperature or relative humidity, odors (e.g., perfume or cleaning materials), passive tobacco smoke, alcohol, sexual arousal, or emotional factors.

Drug-induced rhinitis may be caused by oral medications, including angiotensin-converting enzyme (ACE) inhibitors, beta-blockers, various antihypertensive agents, chlorpromazine, aspirin, other nonsteroidal anti-inflammatory drugs (NSAIDs), and oral contraceptives as well as topical α-adrenergic decongestant sprays that have been used for more than 5 to 7 days (rhinitis medicamentosa). Repeated use of intranasal cocaine and methamphetamines may also result in rebound congestion and, on occasion, septal erosion and perforation.

In viral rhinitis, patients generally complain of an annoying, persistent mucoid nasal discharge accompanied by nasal and facial congestion, along with a constellation of viral symptoms, including low-grade fever, myalgias, and sore throat. These patients generally seek care, because they feel miserable, cannot sleep, and want relief. They often believe that antibiotics are needed to cure their problem.

On physical examination, there is only nasal mucous membrane congestion, which may appear erythematous, along with cloudy nasal secretions, which may become somewhat yellow and thick after several days. Resolution occurs within 10 days to 2 weeks.

Determine which specific symptoms are most bothersome to the patient (e.g., nasal congestion, pruritus, rhinorrhea, sneezing), the pattern of the symptoms (e.g., intermittent, seasonal, perennial), any precipitating factors in the home or occupational environment, the response to previous medications, and any coexisting conditions.

Use a hand-held otoscope or headlamp with nasal speculum to view the anterior nasal airway. (A topical decongestant improves visualization of the nasal cavity.)

Educate the patient about avoidance of any known inciting factors. In particular, patients who are allergic to house dust mites should use allergen-impermeable encasings on the bed and pillows. For patients with seasonal allergies, pollen exposure can be reduced by having them keep windows closed, using an air conditioner, and limiting the amount of time spent outdoors.

Patients should be instructed to direct sprays away from the nasal septum to avoid irritation and not to tilt the head back when spraying, to avoid having the drug run out of the nasal cavity and into the throat.

An alternative to oral antihistamines is the intranasal antihistamine azelastine (Astelin Nasal Spray) for adults and children older than 12 years of age, 2 sprays per nostril bid. Side effects many include a bitter taste in the mouth and sedation.

Topical decongestant nasal sprays and oral decongestants can effectively reduce nasal congestion for both allergic and nonallergic forms of rhinitis, but they can cause side effects (especially the oral forms) of insomnia, nervousness, loss of appetite, and urinary retention in males. They should be used with caution or not at all in patients with arrhythmias, hypertension, or hyperthyroidism. Prescribe pseudoephedrine (Sudafed), 60 mg q6h; time-released version, 120 mg bid, or syrup, 3 mg/mL (for children 2 to 5 years old, 5 to 30 mg q4-6h; for children 6 to 12 years old, 30 mg q4-6h or 4 mg/kg/day divided q6h [1 mg/kg/dose]).

The same cautions and contraindications exist for nasal decongestants as for the oral medications. Because of the use of pseudoephedrine in the illegal manufacture of amphetamine drugs, it now must be purchased behind the counter.

In addition, ipratropium bromide (Atrovent Nasal Spray) 0.06%, two sprays per nostril tid to qid have been shown to help but works best in vasomotor (idiopathic) rhinitis.

Perform a general examination, including a careful nasal examination, to exclude any associated diseases, such as rhinosinusitis, otitis media, bacterial pharyngitis, and asthmatic bronchitis.

For nasal congestion, prescribe oral or topical decongestants, as you would for allergic rhinitis (described earlier). For rhinorrhea, you can prescribe ipratropium bromide (Atrovent Nasal Spray) 0.06%, 2 sprays per nostril tid to qid.

Nasal saline irrigation has been shown to have some efficacy in the relief of viral rhinitis. This can easily be accomplished with a commercially available neti pot.

When pain, redness and tender swelling around the nostrils occur because of nose picking or excessive rubbing or blowing of the nose (nasal vestibulitis) (Figure 39-1), treat with an antistaphylococcal antibiotic ointment—mupirocin (Bactroban) 2%, apply tid × 2 weeks—and recommend warm compresses. Patients with diabetes, immune deficiency, or progressive infection should be placed on a systemic antistaphylococcal antibiotic to avoid potential spread to the cavernous sinus. 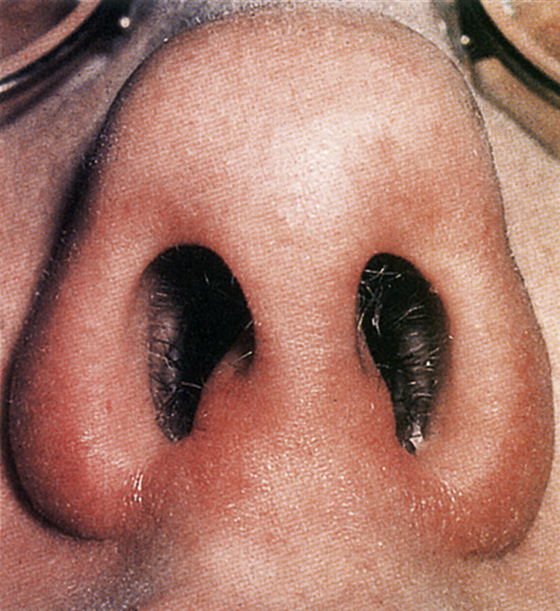 Do not prescribe sedating antihistamines for symptoms of hay fever.

Do not prescribe antihistamines or nasal steroids for the common cold.

Do not obtain imaging studies of the sinuses unless the criteria for bacterial rhinosinusitis are met (symptoms lasting more than 7 days and including facial or dental pain or tenderness along with purulent nasal drainage).

Do not prescribe antibiotics for cold symptoms. Antibiotics should only be considered if symptoms persist for more than 7 days and are accompanied by signs of rhinosinusitis (see Chapter 40).

Do not bother recommending the use of zinc lozenges. Despite numerous randomized trials, the evidence for their effectiveness in reducing the duration of common cold symptoms is still lacking.

Rhinitis is an inflammation of the nasal mucous membranes. Allergic rhinitis triggers a systemic increase in inflammation. Within minutes of allergen exposure, immune cells release histamine, proteases, cysteinyl leukotrienes, prostaglandins, and cytokines. Systemic circulation of inflammatory cells permits their infiltration into other tissues where chemoattractant and adhesion molecules already exist. Consequently, allergic rhinitis is linked to comorbid conditions: asthma, chronic hyperplastic eosinophilic sinusitis, nasal polyposis, and serous otitis media. Effective therapy should ideally be directed at the underlying inflammation and its systemic manifestations. It should improve the rhinitis and the comorbid conditions.

Immunotherapy (allergy shots) is the only treatment that produces long-term relief of symptoms. Patients should be considered candidates for these treatments, based on the severity of their symptoms and the failure or unacceptability of the other treatment modalities.

Nasal polyps are benign inflammatory growths that arise from the inflamed mucosa lining the paranasal sinuses. They are frequently associated with sinus disease. Unilateral nasal polyps should raise consideration of a possible neoplasm.