Although a needle could be embedded under any skin surface, most commonly a patient will have stepped on one while running or sliding barefoot on a carpeted floor. In general, but not invariably, the patient will complain of a foreign body sensation with weight bearing. A very small puncture wound will be found at the point of entry, and frequently, a portion of the needle will be palpable. Occasionally, the needle goes in eye first, and a thread is hanging out of the puncture.

Tape a partially opened paper clip as a skin marker to the plantar surface of the foot, with the tip of the opened paper clip over the entrance wound. Instruct the patient not to allow anyone to remove the paper clip until after the needle is removed (Figure 148-1, A). 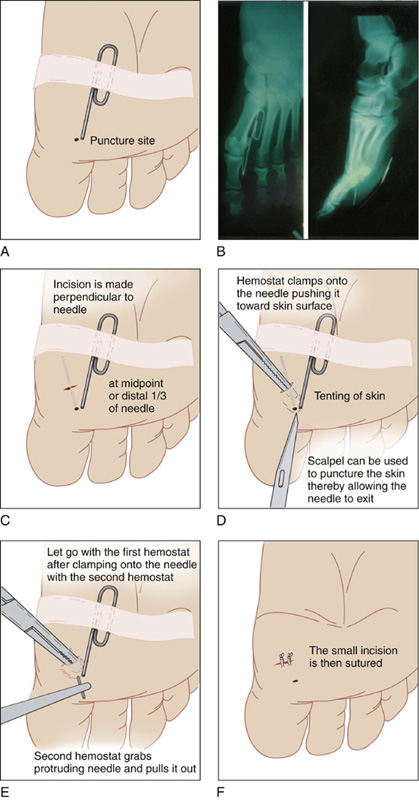 Figure 148-1 Procedure for removing a needle from the foot.

Send the patient for anteroposterior and lateral radiographs of the foot with the skin marker in place (Figure 148-1, B).

Establish a bloodless field by elevating the leg above the level of the heart, tightly wrapping an Ace bandage around the foot up to the calf. Finally, inflate and clamp off a sphygmomanometer calf cuff at approximately 50 to 75 mm Hg above the patient’s systolic pressure. This will become uncomfortable within 10 to 15 minutes and thereby serve as an automatic timer for the procedure. Do not leave the tourniquet inflated for more than 15 to 30 minutes, regardless of the patient’s symptoms.

Remove the Ace wrap, clean, and then paint the area with povidone-iodine solution. Depending on the location of the foreign body, consider performing a posterior tibial or a sural nerve block. Augment this as needed with locally infiltrated buffered 1% lidocaine (Xylocaine).

The radiographs should reveal an approximate location of the needle relative to the paper clip skin marker.

With the patient lying prone and the plantar surface of his foot facing upward, using a No. 15 scalpel blade, make an incision that crosses perpendicular to the needle’s apparent position at its midpoint or one third of the way toward the most superficial end of the needle. Cut down until striking the needle, but do not cut deep to the plantar fascia (Figure 148-1, C).

As the needle is cut across, there will be an audible clicking sound. Spread the incision apart, visualize the needle, and grasp it firmly with a hemostat or small Kelly clamp.

Now push the needle out in the direction from which it entered. Even the eye or back end of a broken needle is sharp enough to be pushed to the skin surface.

If the needle tents up the skin and will not push through, nick the overlying skin surface with a scalpel blade until the needle exits (Figure 148-1, D). Grab this end with another clamp, let go of the first clamp, and remove the needle (Figure 148-1, E).

Let the thigh cuff down, and suture the incision closed. Apply an appropriate dressing (Figure 148-1, F).

Do not pull on a thread that is hanging out of a puncture wound. It could potentially break off, leaving an infection-prone foreign body behind. The thread will come out with the needle if the described technique is used.

Do not ignore the patient who thinks he stepped on a needle but in whom a puncture wound cannot be found. Obtain a radiograph anyway, because the puncture wound is probably hidden.

Do not give the patient the impression that the removal will be quick and easy.

Do not make the incision near the tip of the needle or directly over and parallel to the needle. The needle will not be exactly where it is thought to be, and the incision will very likely miss exposing the needle.

Do not persist in extensively undermining or extending the incision if the needle is not located within approximately 10 minutes of beginning the procedure. This is unlikely to be productive and may do the patient harm.

Do not routinely place the patient on prophylactic antibiotics.

Many a young doctor has been found sweating away at the foot of an emergency department stretcher, unable to locate a needle foreign body. The secret for improving the chances of success is in realizing that the radiograph gives you only an approximate location of the needle and that the incision must be made in a direction and location best suited for locating the needle, not removing it.

There are three additional principles to keep in mind. First, the position of the needle on radiographs needs to be correlated with the anatomy of the skin surface rather than the bony anatomy of the foot. Second is the simple geometric principle that the surest way to intersect a line (the needle) is to bisect it in the plane perpendicular to its midpoint. Third, the only structures of importance in the forefoot or heel that lie plantar to the bones are the flexor tendons, and they lie close to the bones.

Let the patient know how difficult it sometimes is to locate the needle and remove it; this can create a win-win situation: the clinician looks good if it is found and still looks experienced and well-informed if it is not found.

If the patient is taken to fluoroscopy, the clinician or radiologist can place a hemostat around the needle under a real time radiographic image. It can then be pushed out using the same technique described earlier. Ultrasonography may be an alternative modality for localizing an underlying needle, but it is thought to be technically demanding and requires practice.

Using the simple technique described, linear foreign bodies, such as needles, can be removed from the sole of the foot without extensive dissection, complex or cumbersome equipment, or repeated radiographic studies.