As well-performed chest compressions in the non-pregnant situation can achieve only 30% of normal cardiac output and aortocaval compression further reduces this efficiency to an estimated 10%, there should be early recourse to emptying the uterus if CPR is unsuccessful. For this reason, from 20 weeks’ gestation, if there has been no response to appropriately performed CPR by 4 minutes, or if resuscitation is continuing beyond this time (e.g. following transfer from the community), the uterus should be emptied to improve the response to CPR. This should be carried out by 5 minutes. This is done purely in maternal interests, whether the baby is alive or dead (do not waste time checking), but a neonatologist should be present in a hospital setting for assessment and resuscitation of the baby after viability (23 weeks onwards). No anaesthetic is required, and it should be performed where resuscitation is taking place. A fixed blade scalpel should be available on the resuscitation trolley, and the operator should perform the incision they are most comfortable with, although a classical incision is marginally faster. In the absence of circulation, blood loss is minimal, but if circulation is restored, transfer to the theatre environment and anaesthesia should be instigated. Haemorrhage can be controlled in the short term if indicated by compressing the aorta against the spine with a fist just above the bifurcation.

The most robust data available regarding maternal outcome following perimortem caesarean section shows a survival rate of 65% if the cause of collapse is reversible, with survival rates being improved if the procedure is carried out within 5 minutes of collapse. Neonatal survival is influenced by rapid delivery, gestational age and delivery in the delivery suite environment or critical care.

The UK Obstetric Surveillance System (UKOSS) is currently studying outcomes following maternal collapse and will give more current information for the UK.

Outside pregnancy, the 4Hs and 4Ts aide memoire of reversible causes is useful, and many have modified this for the pregnant patient to ‘THE’ reversible causes of maternal collapse, with the 4Hs and 4Ts unchanged, and the E added for eclampsia (Chapter 14), including intracranial haemorrhage. Haemorrhage and thromboembolism are the most common causes of collapse. See Figure 25.2 for causes of maternal collapse. 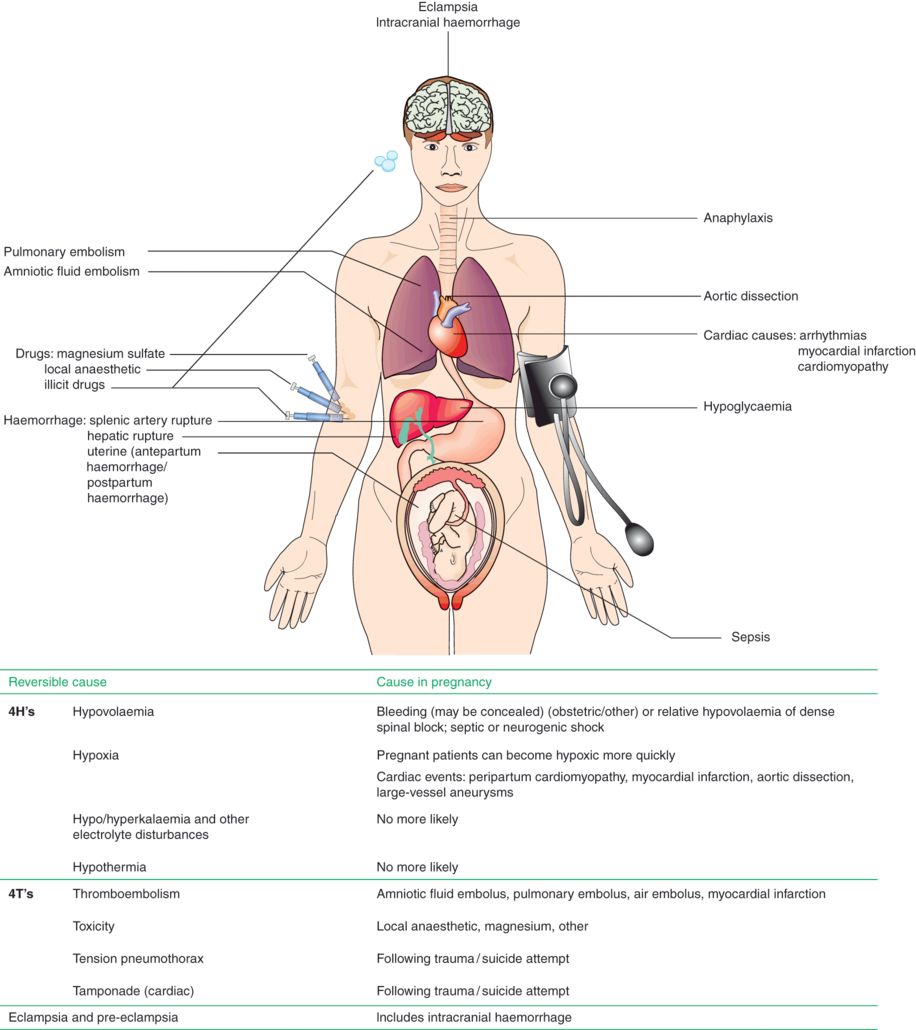 Another useful mnemonic for causes of maternal collapse by Dr Joel Naftalin (Year 6 Specialist Trainee in Obstetrics and Gynaecology, London Deanery) is ‘SHE CAN DIE’:

Amniotic fluid embolism (AFE), also known as the anaphylactoid syndrome of pregnancy, was first described in the 1940s after fetal material was found in the pulmonary circulation of women who had died following maternal collapse in labour. It presents as acute maternal collapse during labour, birth or the first 60 minutes after delivery. The incidence in the UK is around 2/100,000 maternities, and its occurrence, in general, is unpredictable. Survival rates have improved significantly over the last 35 years, and are currently around 80%, but with a significant risk of hypoxic neurological damage in the survivors. If AFE occurs prior to birth, perinatal mortality remains high at 135 per 1000 total births.

Risk factors include induction of labour, caesarean section, abruption, placenta praevia, eclampsia, advanced maternal age and multiple pregnancy. Clinical features of AFE include sudden anxiety and agitation, acute hypotension, dyspnoea, cyanosis, respiratory distress, acute hypoxia, arrhythmias, seizures and cardiac arrest. If it occurs prior to delivery, acute fetal distress is seen. The exact aetiology remains unclear, but it is thought that fetal material enters the maternal circulation and is transported to the lungs. Pulmonary hypertension develops acutely, due to vascular occlusion secondary to vasoconstriction caused by the release of various vasoactive substances, or debris blocking the pulmonary microvasculature, along with acute right ventricular failure leading to a marked reduction in cardiac output and acute hypoxia. This is followed by left ventricular dysfunction or failure. If the mother survives, profound disseminated intravascular coagulation (DIC) occurs rapidly, which often results in major postpartum haemorrhage. The pathophysiology of AFE has been likened to anaphylaxis or sepsis, hence the name anaphylactoid syndrome of pregnancy. The diagnosis is made clinically or at the time of autopsy, but is often a diagnosis of exclusion. Although various other diagnostic tests are being researched, none have been shown to be clinically useful as yet. As the diagnosis is often one of exclusion, other causes of collapse must be investigated and excluded. A useful indicator is a coagulation screen, as if clotting is impaired in the absence of major haemorrhage and replacement therapy, AFE is likely.

Management is supportive and input from senior staff, including an intensivist, is required. Aggressive resuscitation is essential, with rapid oxygenation and early recourse to intubation and ventilation. If AFE occurs antepartum, the baby and placenta should be delivered immediately. Pharmacological support of the cardiovascular system is often required, and central monitoring of cardiac output is useful to avoid fluid overload, as this will increase the risk of pulmonary oedema and acute respiratory distress syndrome (ARDS). Arrhythmias are common, and should be treated as standard. Major postpartum haemorrhage is likely if the mother survives the initial collapse, and is secondary to DIC and uterine atony. Both should be treated aggressively (see below). Following resuscitation, transfer to a critical care setting for ongoing management is indicated, with multidisciplinary support.

This is the commonest cause of maternal collapse, and is responsible for up to 50% of the estimated 500,000 maternal deaths that occur worldwide each year, although in the UK deaths from obstetric haemorrhage are uncommon (3.9/1,000,000 maternities). It is also the major cause of severe maternal morbidity in almost all ‘near miss’ audits, in both developed and developing countries. In many cases, sub-standard care is identified as a contributing factor.

Haemorrhage can occur antepartum, intrapartum or postpartum, and it is well recognized that visual blood loss estimation often underestimates actual losses. Major haemorrhage is defined as a blood loss of greater than 1000 mL. The main causes of major antepartum/intrapartum haemorrhage are placental abruption and placenta praevia.

This occurs when part of the placenta separates from the uterus prior to delivery of the baby, with resultant haemorrhage, which may be revealed, concealed behind the placenta, or a mixture of both (thus blood loss is often greater than that seen). With large placental abruption, the uterus has a hard wooden consistency. The diagnosis is a clinical one, as ultrasound is not a reliable method to diagnose placental abruption. Significant placental abruption carries an increased risk of DIC, and this should be screened for early. Bleeding can often go unrecognized or underestimated, and it predisposes to postpartum haemorrhage secondary to atony +/− DIC.

The causes of postpartum haemorrhage are easily remembered using the 4 Ts – tone, tissue, trauma and thrombin. Uterine atony accounts for over 70% of cases and can co-exist with the other causes.