Clinicians must follow a systematic approach to distinguish between the physiologic and pathologic etiologies of unconjugated hyperbilirubinemia in order to promptly identify children in need of immediate intervention. The ultimate goal is to prevent the development of kernicterus—the permanent neurologic consequence of bilirubin deposition in brain tissue; the acute neurologic manifestations are known as acute bilirubin encephalopathy, the term recommended by the American Academy of Pediatrics (AAP).

Bilirubin is the final product of heme degradation. Heme protoporphyrin is oxidized and subsequently reduced in macrophages to form unconjugated bilirubin, which is released into the plasma. At physiologic pH, bilirubin is insoluble in plasma and requires binding to albumin. When it exceeds the binding capacity of albumin, the unbound unconjugated bilirubin may cross the blood–brain barrier and deposit in the basal ganglia, causing acute bilirubin encephalopathy.

During normal physiologic conditions, the liver conjugates bilirubin by glucuronyl transferase and then excretes the conjugated form into bile. Most conjugated bilirubin is secreted through the bile into the small intestine, where bacterial enzymes degrade it to urobilinogen—90% is degraded and excreted in feces, while 10% is reabsorbed into the liver via enterohepatic circulation.

Newborn infants inherently possess multiple factors which contribute to the development of physiologic hyperbilirubinemia: increased red blood cell (RBC) volume, decreased RBC life span, immature hepatic uptake and conjugation, and increased enterohepatic circulation. Hyperbilirubinemia is considered pathologic when it is present in the first day of life, when the level exceeds the age-specific 95th percentile or has a concerning rate of rise (greater than 0.2 mg/dL/hr), when the conjugated fraction is high, or in the presence of concerning physical examination or laboratory findings.

The causes of unconjugated hyperbilirubinemia may be classified into three groups, based on mechanism of accumulation: excess bilirubin production, decreased bilirubin conjugation, impaired bilirubin excretion (Table 40.1).

The numerous causes of hemolysis may be categorized as intravascular or extravascular. Intravascular hemolysis may be further divided into intrinsic and extrinsic RBC defects. Inherited RBC enzyme deficiencies include glucose-6-phosphate dehydrogenase (G6PD) deficiency and pyruvate kinase deficiency. G6PD is common in children of African, Asian, and Mediterranean descent; patients with this disorder who are exposed to oxidant stress (e.g., fava beans, sulfa drugs) may present with acute rapid hemolysis (see Chapter 101 Hematologic Emergencies). Children with hemoglobinopathies, such as sickle cell disease and thalassemias, are prone to hemolysis. Congenital defects in the RBC membrane found in hereditary spherocytosis and hereditary elliptocytosis increase the fragility of the corpuscles, which predisposes patients to hemolytic episodes.

Maternal–fetal blood group incompatibility is critical to recognize early. When maternal antibodies are produced against fetal RBC antigens, the neonate can develop a Coombs positive isoimmune hemolytic anemia. ABO incompatibility generally occurs in infants with A or B blood groups whose mothers have type O blood group; maternal anti-A and anti-B antibodies are produced and can result in hemolysis with a positive direct Coombs test. Rh-negative mothers may become sensitized to an Rh-positive fetus during pregnancy and mount an antibody response during a subsequent pregnancy leading to Rh disease of the newborn. Administration of Rho (D) immune globulin (RhoGAM) to Rh-negative mothers who have not yet developed anti-Rh antibodies can prevent Rh isoimmunization. Infections such as sepsis, urinary tract infection (UTI), and malaria are also important causes of hemolysis. Other extrinsic causes of RBC destruction include the autoimmune, microangiopathic, and drug-induced hemolytic anemias.

Birth trauma, when associated with cephalohematoma, extensive bruising, or swallowed maternal blood, can result in hyperbilirubinemia. Intracranial, pulmonary, or other concealed hemorrhage can also lead to extravascular hemolysis. Similarly, polycythemia, caused by delayed clamping of the cord or maternal–fetal or fetal–fetal transfusion (in multiple gestations), increases the RBC mass and causes jaundice in neonates thereby increasing the risk for supraphysiologic serum bilirubin. Various hypersplenic states, including splenic sequestration crisis in sickle cell disease, may result in anemia with accompanying hemolysis and hyperbilirubinemia. 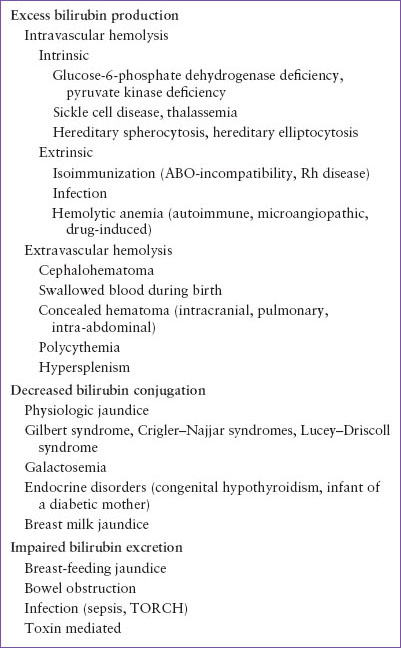 Incomplete maturation of conjugation enzymes in the newborn infant’s liver is the most common etiology of mild hyperbilirubinemia, with approximately 60% of neonates manifesting clinical signs of physiologic jaundice. Physiologic jaundice peaks between 3 and 5 days of life in the term infant, rarely exceeds 12 mg per dL, and requires no treatment.

Gilbert syndrome is a common cause of mild, intermittent, unconjugated hyperbilirubinemia that occurs in approximately 6% of the population. Patients with Gilbert syndrome have a partial deficiency of glucuronyl transferase. They generally present in late childhood with nonspecific abdominal pain, nausea, and mild jaundice in the setting of an intercurrent illness; there is no hepatosplenomegaly on physical examination and the remainder of liver function studies is normal. The serum bilirubin rarely exceeds 5 mg per dL in this benign cause of jaundice.

Crigler–Najjar syndrome is characterized by the absence or deficiency of the enzyme bilirubin glucuronyl transferase. Type I is the more severe form, manifests soon after birth, and is associated with high morbidity and mortality. Type II is milder, and is caused by an incomplete deficiency of the same enzyme; it typically presents in infancy or later in childhood. Lucey–Driscoll syndrome is a form of transient familial hyperbilirubinemia, and is caused by an inhibitor of glucuronyl transferase in the mother’s serum; the syndrome resolves as the inhibitor is cleared from the neonate’s blood.

Unconjugated hyperbilirubinemia may be the only presenting sign of congenital hypothyroidism, preceding other manifestations by several weeks. The mechanism is thought to relate to reduced bile flow. Other signs include poor feeding, prolonged jaundice, constipation, and hypotonia. Infants of diabetic mothers are also at increased risk for jaundice, with as many as 19% developing nonphysiologic hyperbilirubinemia.