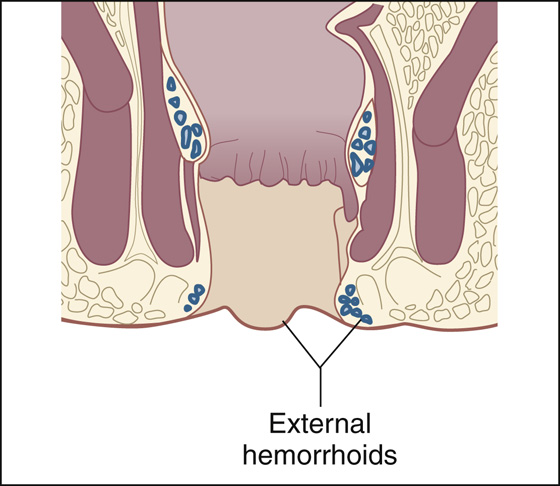 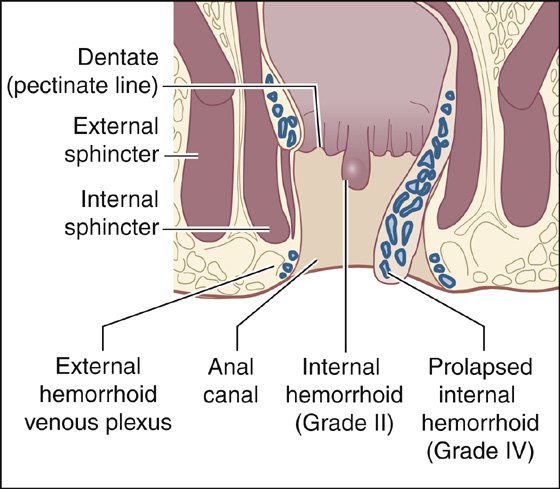 If the problem is rectal bleeding, it should be approached as with any other gastrointestinal (GI) bleeding. The amount of bleeding should be quantified with orthostatic vital signs and a hemoglobin and hematocrit. When there is evidence of severe hemorrhage, rapid volume replacement and early surgical consultation should be initiated.

An adequate physical examination should include careful inspection, palpation, and digital examination. Anoscopy and proctosigmoidoscopy should be performed as soon as possible when there is rectal bleeding. However, evidence of hemorrhoidal bleeding does not exclude other causes of rectal bleeding; therefore a complete colonic evaluation should be done at some point in those who are at a risk, based on family history, or who are at an age for colonic screening evaluation. Young patients in whom hemorrhoids are the obvious source of bleeding may not require more than a digital rectal examination and anoscopy.

For nonthreatening rectal bleeding from hemorrhoids, the initial management should include a high-fiber diet, stool softeners, and bulk laxatives, and the patient should be instructed to spend less time sitting and straining on the commode. Patients also should be taught not to neglect their first urge to defecate; those who are troubled with constipation should be given an osmotic laxative (see Chapter 67).

If topical mucosal anesthetic does not give enough relief to permit examination, follow with subcutaneous injection of 5 to 10 mL of 1% lidocaine with epinephrine or bupivacaine 0.5% with epinephrine for extended pain relief.

If topical anesthetics on the rectal mucosa help control the pain, provide for more of the same, perhaps also with some added corticosteroid for anti-inflammatory effect (Anusol-HC cream). Suppositories are convenient but may not deliver the medication where it is needed; so, prescribe cream or foam (Proctofoam-HC) applied externally rather than internally.

Pain may also be relieved by reducing sphincter spasm. Prescribe topical nifedipine 0.2% or diltiazem gel 2% with lidocaine gel 1.5% to be applied every 12 hours. Topical glyceryl trinitrate 0.2% or nitroglycerin ointment can be substituted for the diltiazem and nifedipine, but many patients are unable to tolerate the headaches that frequently occur. (These prescriptions often need to be filled at a compounding pharmacy.)

Small ulcerated external hemorrhoids usually do not require any treatment for hemostasis. Bulk laxatives and gentle cleansing are generally all that is required. Occasionally, patients present several days after an external hemorrhoid has thrombosed with a small gush of dark blood because of a ruptured pile. This may continue to ooze for a day or two. With or without rupture, if the pain has subsided, all that is required is reassurance and the general measures described previously. Inform the patient that symptoms should resolve in approximately 2 weeks.

When an acutely thrombosed hemorrhoid is engorged and causing severe pain, and there are no anticipated bleeding problems, the hemorrhoid should be incised to provide pain relief. Consider using procedural sedation (see Appendix E). Apply an ice pack for 15 minutes; then, using the smallest needle available, inject around it and infiltrate the dome of the mass with a local anesthetic to allow for examination and excision. As described previously, use lidocaine or bupivacaine with epinephrine. Have an assistant spread the buttocks. The thrombus may be enucleated through an elliptic incision over the anal mucosa. Make the elliptic incision around the clot but not past the cutaneous layer or past the anal verge. Locular clots can be broken up by inserting a straight hemostat into the wound and spreading the tips, thereby allowing the clots to be expressed. Pain relief from this simple surgical technique can be dramatic, but excision is not effective unless the entire thrombosed lesion is completely removed (Figures 73-3 and 73-4). Apply a compression dressing and tape the buttocks together for 12 hours to minimize bleeding. Occasionally, Gelfoam may be needed to help control oozing. The patient can then begin the nonsurgical treatment described previously. Schedule a follow-up examination in 2 days. Narcotics may be prescribed for a few days but should be switched to nonsteroidal anti-inflammatory drugs (NSAIDs) as soon as the risk of bleeding has lessened so as not to cause constipation. 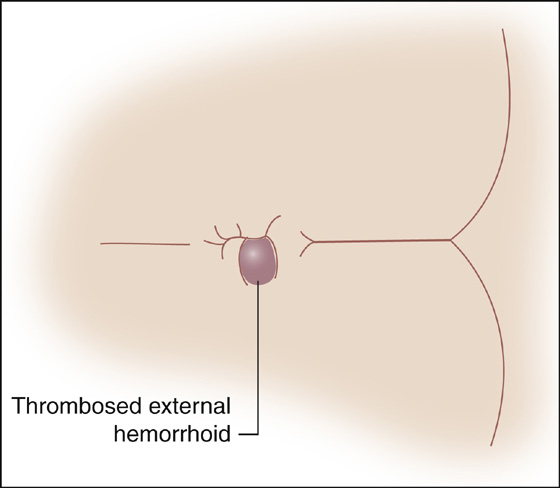 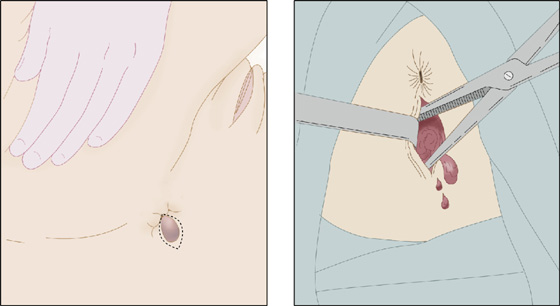 Do not labor to reduce prolapsed hemorrhoids unless they are part of a large rectal prolapse with some strangulation. Everything may prolapse again when the patient stands or strains. Bulky but asymptomatic hemorrhoids should be left alone. Treatment is directed toward symptom control, not appearance, until definitive care is received.

Do not traumatize the patient when doing an examination.

Do not excise a thrombosed hemorrhoid when the patient has a bleeding abnormality, is taking an anticoagulant or daily aspirin, or has increased portal venous pressure.

Do not allow patients to use hydrocortisone topical therapy for longer than 7 to 10 days. Prolonged use can lead to mucosal atrophy.

Do not have the patient sit on a doughnut-shaped cushion. This may actually increase venous congestion.

The word hemorrhoid comes from the Greek hemo (blood) plus rrhoos (flowing). The word “piles” comes from the Latin pila, or ball. As a disease entity, hemorrhoids have been reported to plague the human race since the earliest history of man.

Elastic banding techniques, which have become one of the most frequently applied methods of treatment of internal hemorrhoids, can be 80% to 90% curative for second-, third-, and fourth-degree lesions. This technique is associated with a low complication rate (<2%). Patients with bleeding diatheses, or both internal and external hemorrhoids, are best treated by means of surgical resection.