Frostnip occurs when skin surfaces, such as the tip of the nose and ears, are exposed to an environment cold enough to freeze the epidermis. These prominent, exposed surfaces become blanched and develop paresthesias and numbness but remain pliable. As they are rewarmed, they become hyperemic and are usually very painful.

Superficial frostbite can be either a partial- or a full-thickness freezing of the dermis. The frozen surfaces appear white or mottled, feel doughy or hard, and are insensitive. With rewarming, these areas become erythematous and edematous, with severe pain (Figure 169-1). Blistering occurs within 24 to 48 hours with deeper partial-thickness frostbite. 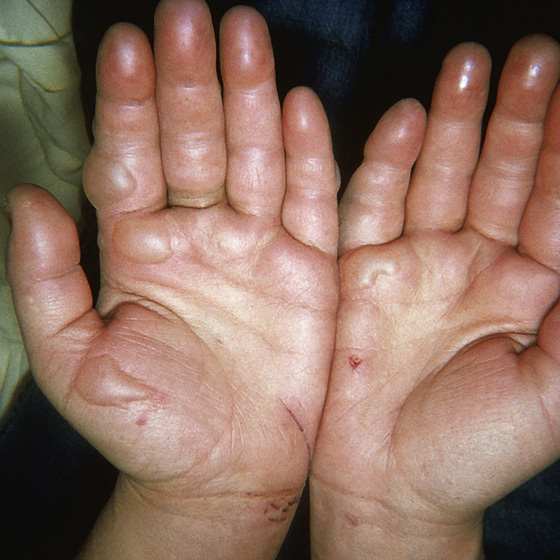 Patients who have core body temperatures between 32° C and 35° C are considered to suffer from mild hypothermia and may demonstrate tachypnea, tachycardia, dysarthria, and shivering.

Obtain an accurate history of the severity and length of exposure as well as a history of any underlying preexisting medical disorders. Examine the sensitivity of any affected parts of the body. The ability to sense light touch and noxious stimuli helps determine the prognosis. Favorable prognostic indicators suggesting superficial injury are normal skin color, development of clear fluid in blisters, and the ability of the skin to deform under pressure. Dark color, hemorrhagic blisters, cyanosis, and hard nondeforming skin suggest deep injury.

Prior to rewarming, give ibuprofen (Motrin), 400 mg PO, or aspirin, 325 mg PO. This may improve tissue salvage.

When there is no longer any danger of reexposure and refreezing, rapidly warm the affected part with heated blankets (or someone else’s warm skin in the case of frostnip) or, preferably, in a warm whirlpool bath (at 40° C to 42° C [104° F to 108° F]) for 15 to 30 minutes or until capillary refill returns and the tissue is supple.

A strong parenteral analgesic, such as morphine or hydromorphone (Dilaudid), may be required to control pain.

Mild hypothermia can be treated with passive external rewarming, which consists of placing the patient in a warm dry environment after removal of wet clothing. The patient is then covered with blankets. This alone can be expected to raise the core temperature approximately 0.5° C to 2° C per hour. Adding heating blankets or a forced heated air system (active external rewarming) will increase the rate of recovery.

When blistering occurs, bullae should not be ruptured, although this is somewhat controversial. If the blisters are open, however, they should be débrided and gently cleansed with 1% povidone-iodine and normal saline. Silvadene cream may be applied, followed by a sterile absorbent dressing. Although topical aloe vera is now often recommended, it has not been proven to improve tissue viability. Injured tissue should be handled gently, and dressings must be loose, noncompressive, and nonadherent.

More extensive involvement (often anything more than first-degree injury) requires hospitalization. Hands and feet should be splinted and elevated to reduce edema, and the digits must be separated by nonadherent gauze.

Tetanus prophylaxis should be instituted when indicated (see Appendix H).

Outpatients should be provided with follow-up care and warned that healing of the deeper injuries may be slow and produce skin that remains sensitive for weeks. Late sequelae of superficial frostbite include cold hypersensitivity (53%), numbness (40%), decreased sensation (33%), and impaired ability to work (13%).

Do not warm the injured skin surface while in the field, if there is a chance that refreezing will occur. Reexposing even mildly frostbitten tissue to the cold without complete rewarming can result in additional damage.

Do not rub the injured skin surface in an attempt to warm it by friction. This can also create further tissue destruction.

Do not allow the patient to smoke. Smoking causes vasoconstriction and may further decrease blood flow to the frostbitten extremity.

Do not confuse frostnip and superficial frostbite with deep frostbite. Severe frostbite, when the deep tissue or extremity is frozen with a woody feeling and lifeless appearance, requires inpatient management and could be associated with life-threatening hypothermia.

Current scientific knowledge suggests that localized cold injury represents a continuous spectrum ranging from minimal to severe tissue destruction and loss. Frostbite has been categorized into four degrees of severity. First-degree frostbite is characterized by an anesthetic central white plaque with peripheral erythema. Second-degree injury reveals blisters filled with clear or milky fluid surrounded by erythema and edema, which appear in the first 24 hours. Third-degree injury is associated with hemorrhagic blisters that result in a hard black eschar, seen over the course of 2 weeks. Fourth-degree injury produces complete necrosis and tissue loss.

In general, treatment for the four categories of frostbite is the same until demarcation occurs within 3 to 4 weeks after injury.

Hypothermia is classified as being either mild (as previously described) or moderate—with temperatures between 28° C and 32° C, loss of shivering, and diminished level of consciousness—or severe, with core temperatures below 28° C and loss of reflexes, coma, and, eventually, ventricular fibrillation and death. Moderate to severe hypothermia is a medical emergency necessitating maintenance of airway, breathing, and circulation.

Most victims of hypothermia and localized cold injuries are in one of three categories: the urban poor, wilderness enthusiasts, and winter sports participants.

Frostbite is more common in persons exposed to cold at high altitudes. The areas of the body most likely to suffer are those farthest from the trunk or large muscles: ear lobes, nose, cheeks, fingers, hands, toes, and feet. Touching cold metal with bare hands can cause immediate frostbite, as can the spilling of gasoline or other volatile liquids on the skin when the temperature is very low. Factors contributing to hypothermia as well as localized cold injuries include alcohol intoxication, homelessness, and major psychiatric disorders. For those who participate in winter outdoor recreational and sports activities, direct exposure of skin and wearing constricting clothing, such as tight-fitting footwear, will predispose them to frostbite.

Frostnip is a superficial freezing of the skin, a precursor to frostbite, and produces reversible skin changes, including blanching and numbness that resolve with warming. It is important to treat frostnip early to avoid progression to frostbite. With gentle rewarming, the frostnip-affected area becomes hyperemic, and the sensation of pain returns rapidly.

Frostbite occurs when tissue freezes and crystals form in the extracellular space between cells. This occurs at ambient temperatures below 32° F (0° C). With dehydration, vasoconstriction, and low epidermal temperature, circulation is limited as blood viscosity increases, and water, hydrostatically pulled out of cells, begins to freeze. Close to 60% of frostbite injuries involve the lower extremities, in particular the great toe and feet. Predisposing diseases can include Raynaud disease, peripheral vascular disease, and diabetes mellitus. Tobacco smoking is another factor that can increase the likelihood of developing frostbite.

Planning for the threat of hypothermia can prevent cold injury. Individuals in cold and isolated areas should never be alone, or they should carry communication devices, such as cell phones or walkie-talkies. They should limit heat loss by insulating and dressing appropriately. Many layers are better than one thick layer. Waterproofed outer clothing is essential. Clothing materials should be wool, wool blends, or polypropylene. Cotton is not recommended. All extremities and the head should be covered. The face should be covered, especially with high wind chill. The feet should be protected with two layers of socks. The first layer should be made of polypropylene and the second layer made of wool.