The patient complains of a paint chip or wooden sliver under the nail. There may be only mild discomfort, but frequently there is severe throbbing pain. Most subungual foreign bodies are completely visible and are lodged under the distal portion of the nail. Occasionally, a wooden sliver will be large and deeply embedded over the proximal germinal matrix.

Often the patient has unsuccessfully attempted to remove the foreign body, which has broken off and could not be grabbed using household tweezers.

Without anesthesia, remove the overlying nail by shaving it with a No. 15 scalpel blade (Figure 141-1). This is done by using light strokes in a proximal to distal direction. This technique gradually creates a U-shaped defect in the nail, exposing most of the paint chip and releasing it from beneath the nail. 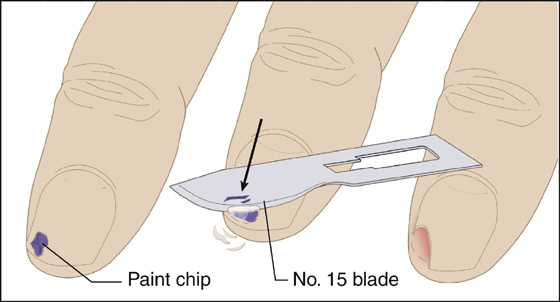 Provide tetanus prophylaxis if necessary (see Appendix H), and then dress the area with antibiotic ointment and a bandage strip.

For small slivers, it may be possible to take a 23- or 25-gauge needle and push it into the exposed end of the splinter, angling the needle up toward the distal nail plate. Then, when the needle is firmly lodged in the splinter (while maintaining the same angle), the sliver can be pulled out by using the needle tip for traction (Figure 141-2). 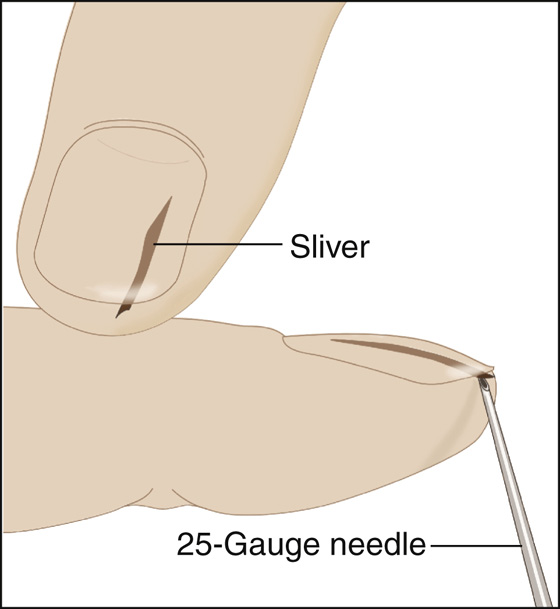 When presented with a large or friable splinter, a more extensive excision of an overlying nail wedge is required. Therefore you will need to perform a digital block (see Appendix B).

Slide a small (but strong) straight iris scissors between the nail and nail bed on both sides of the sliver and cut out the overlying V-shaped wedge of nail (Figure 141-3). The point of the V should be at or near the proximal tip of the splinter. The wedge of nail plate will fall away, and the exposed sliver can be easily picked away.

Figure 141-3 Sliver removal. Push a 23- or 25-gauge needle into the exposed end of the splinter, angling the needle up toward the distal nail plate. Then, when the needle is firmly lodged in the splinter (while maintaining the same angle), the sliver can then be pulled out by using the needle tip for traction.

Cleanse any remaining debris with normal saline, and trim the fingernail until the corners are smooth.

Dress with antibiotic ointment and a bandage. Have the patient redress the area two to three times daily until healed and keep the fingernail trimmed close.

Do not run the tip of the scissors into the nail bed while sliding it under the fingernail (instead angle the tip up into the undersurface of the nail). Damage to the germinal matrix could potentially lead to a permanent nail plate deformity.

Do not routinely prescribe antibiotics. When the foreign body has been removed, there is little risk for infection.

It is usually not possible to remove a long sliver from beneath the fingernail using the “shaving” technique with a scalpel blade without injuring the surrounding proximal nail bed and causing the patient considerable discomfort.

After providing a digital block, it is sometimes possible to remove the sliver by surrounding it with the tips of a hemostat that have been slipped between the nail and nail bed. Then, by grasping it, the entire sliver can be withdrawn. If any significant debris remains visible, however, the overlying nail wedge probably should be removed to help prevent a nail bed infection.

Very small and minimally painful subungual foreign bodies, particularly the ones composed of nonreactive materials, may not need to be removed at all and can be managed conservatively. Some clinicians will only provide analgesics and allow uninfected slivers to grow out with the nail. The sliver can be removed more easily in 10 to 14 days. These patients should be informed of the possible increased risk for infection, and they require easy access to follow-up care with any increased pain or swelling or subungual purulence.

A large foreign body made of reactive material, or one that results in significant discomfort, should always be promptly and completely removed.