Usually the patient has experienced multiple burning stings (the “fire” in fire ant) and is seeking help because of local swelling, itching, and/or pain. Twenty-four hours after the initial wheal and flare at the sting site, there is formation of a small (2 mm), sterile, round pustule on an erythematous base, which is virtually pathognomonic for a fire ant sting (Figure 167-1). These lesions often occur in clusters. Sometimes there are large local reactions, and it is not unusual for an entire extremity to be affected. Systemic reactions in previously sensitized individuals are analogous to those caused by hymenopteran stings (see Chapter 171). 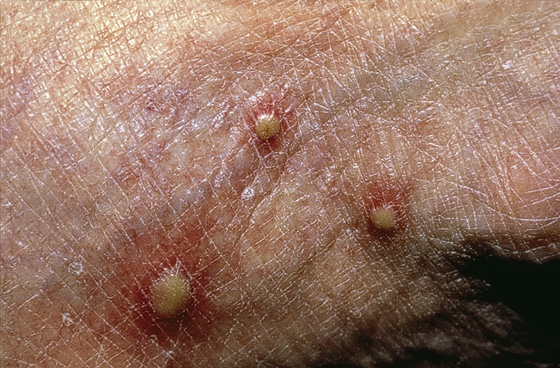 The appearance of the sting site changes over time. Within 1 week, the pustule often ruptures, forming a small crust or superficial ulcer, which then may become secondarily infected. After 1 month, small visible scars will be persistent (Figure 167-2). 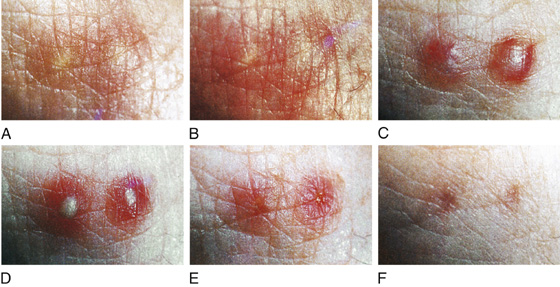 Examine the patient for any signs of an immediate systemic allergic reaction (anaphylaxis), such as decreased blood pressure, generalized urticaria or erythema, or wheezing. Treat with 0.3 to 0.5 mL of intramuscular epinephrine 1:1000 (may repeat every 10 to 15 minutes, as needed, to reverse the symptoms) along with boluses of IV normal saline (see Chapter 171).

Reassure patients who present for treatment after 12 to 24 hours that anaphylaxis is no longer a cause for concern.

For pruritus, prescribe an antihistamine, such as hydroxyzine (Atarax, Vistaril), 25 to 50 mg PO qid.

When swelling is severe or there are other signs and symptoms of an allergic component to the stings, and there are no signs of infection or other contraindications to systemic corticosteroids, prescribe a brief course of prednisone, 40 to 60 mg qd for 4 to 5 days, or give one dose of triamcinolone (Aristocort Forte, Kenalog-40), 40 mg IM.

Have the patient return or seek follow-up immediately at any sign of infection.

Advise all these patients about avoiding future fire ant stings by wearing shoes (not sandals) when walking outside and to add socks, long pants, and work gloves when working outside. If there are infestations of fire ants around homes or businesses, have professional exterminators help with their removal.

Do not open pustules. They are initially sterile, and opening them only increases the chance that they will become infected.

Do not send a patient out less than 1 hour after the initial sting. Observe for possible anaphylaxis.

Do not apply heat, even if an infection is suspected. The swelling and discomfort will worsen.

The term “imported fire ant” refers to several members of the genus Solenopsis (order Hymenoptera), which includes Solenopsis invicta, the most widespread of the species. They were first introduced to Mobile, Alabama, from Brazil in the late 1930s. They rapidly migrated and now occupy approximately 310 million acres in at least 12 states. Their current territory covers much of the South Atlantic seaboard from North Carolina to Florida, extends throughout the southern United States and across Texas, and stretches into portions of New Mexico, Arizona, and California. Compared with most native ants, imported fire ants are aggressive and will actively sting intruders.

When their anthill is disturbed, they will swarm and sting any passerby with the venomous apparatus at the tail end of their abdomens. They can inflict several painful burning stings within seconds, and each ant can inflict multiple stings. They use their mandibles to grasp the skin, then sting and pivot around their mandibles, inflicting stings that eventually produce the distinctive circular pustules. Unlike stings from bees and wasps, fire ant venom contains hemolytic factors that induce the release of vasoactive amines from mast cells and thereby create these sterile lesions. In heavily infested areas, approximately 30% of the population is stung by fire ants each year, with consequences ranging from local reactions to rare life-threatening anaphylaxis. Secondary infection, which can be severe, especially in diabetics and other infection-prone individuals, is an additional threat, even when the immediate reaction is relatively minor.

Increasingly, fire ants have been implicated in indoor attacks on persons in extended care facilities, where patients typically have sustained hundreds or thousands of stings. Immobility is also a risk factor for infants and persons who are inebriated and who fall asleep on or near an ant mound. Patients who are not allergic have sustained thousands of stings without complication.

Studies have shown, on the basis of allergic-specific IgE, that imported fire ants may be the arthropod posing the greatest risk for anaphylaxis to adults who live in endemic areas. Systemic reactions typically occur in patients previously sensitized to fire ant stings, but because their venom contains allergenic proteins that are antigenically similar to other hymenopteran venom, initial sensitization may occur with a bee or wasp sting. Densensitization may be helpful to protect patients who have experienced generalized allergic reactions. Conventional and rush immunotherapy performed with imported fire ant whole-body extract has proved effective and safe for the treatment of this form of hypersensitivity.

The fire ant gets its name from the fierce burning discomfort caused by its sting, not from its color, which ranges from dark red to brown or black. Most stings occur during the late spring and early summer, when the ants are most active and their venom is most potent.