Endoscopic Hemorrhage: This is Even Harder than the Laparoscope!

All patients with acute UGIB should be typed and crossmatched for blood products. While transfusion of red blood cells can be life-saving in situations of severe hemodynamic compromise of active coronary artery disease, less aggressive transfusion strategies are preferred in most cases [2]. Overtransfusion can rapidly increase intravascular volume and result in further bleeding. In patients with a hemoglobin less than 70 g/L, the target hemoglobin for transfusion resuscitation is 70–90 g/L, and this more restrictive approach has been associated with less rebleeding and lower mortality [3]. The use of platelet transfusion is similarly restricted to severe thrombocytopenia [4] (Fig. 18.4).

What was once a traditional dogmatic mainstay in the management of acute UGIB has largely fallen out of favor as a routine intervention [4]. The placement of a nasogastric (NG) tube is uncomfortable and not associated with any reduction in rebleeding or mortality [5]. There are rare instances where aggressive lavage through an oral gastric lavage system may be used to improve visualization, but routine placement of an NG tube is no longer advised .

Often endoscopic visualization and delivery of necessary therapy is limited and hampered by the presence of blood and clots in the upper GI tract. The use of a prokinetic agent such as erythromycin 30 min prior to the planned endoscopy can help to clear contents from the upper GI tract. This intervention has been shown to shorten the duration of endoscopy and reduce the need for repeat endoscopy [6].
There has been controversy as to the merits (or lack thereof) of pre-endoscopic use of proton pump inhibitor (PPI) therapy . The largest meta-analysis on this issue, involving more than 2000 patients, concluded that pre-endoscopic proton pump inhibition therapy essentially downstages high-risk endoscopic lesions [7]. There were less patients with high-risk endoscopic lesions in the PPI-treated group and consequently less need for endoscopic intervention. When used, a bolus dose of 80 mg intravenously of PPI is administered followed by an infusion of 8 mg/hr. This infusion is continued until endoscopic intervention for diagnosis of the bleeding etiology. If endoscopy shows a low-risk lesion, the intravenous infusion of PPI can be discontinued and replaced by oral once-daily PPI therapy.
If endoscopic therapy is applied to an upper GI bleed, the intravenous PPI infusion is continued, although debate exists as to the duration. The premise is that acid suppressive therapy will increase clot stability and lessen the effects of acid on coagulation factors [4]. Evidence supports the continuation of IV PPI infusion for high-risk upper GI bleeding lesion that have been treated with endoscopic hemostasis measures [8]. Thereafter, the intravenous PPI therapy can be switched to oral. A reasonable approach to the use of proton pump inhibitor therapy in acute UGIB is shown below [4] (Fig. 18.5).

Helicobacter pylori (H. pylori) is an established contributing cause to upper GI bleeding. All patients presenting with an acute UGIB should be tested for H.pylori [9]. Serology is the preferred method as endoscopic biopsies or urea breath testing can be falsely negative during acute bleeding. If testing is negative during the acute incident, follow-up testing 4 weeks later should be undertaken to ensure a true negative status. Numerous antibiotic/PPI regimens exist and are largely determined by regional antimicrobial resistance patterns. Confirmation of eradication should be performed with a urea breath test .

Prompt endoscopic investigation and, at times, intervention is a critical component in the management of upper gastrointestinal bleeding. The risk of rebleeding of ulcerated lesions in the upper GI tract is related to the findings seen at the time of endoscopy (Forrest classification ). Actively bleeding lesions (types Ia and Ib) have significant risks of rebleeding (approximately 40–55%) without endoscopic therapy [9]. Conversely, low-risk lesions such as clean-based ulcers or those with pigmented spots have a low risk of rebleeding (<10%) and often do not require endoscopic intervention. Utilizing this classification permits appropriate delivery of endoscopic therapy and disposition planning for the patient. Individuals with low-risk ulcer lesion can often be discharged home with oral proton pump inhibitor therapy (Figs. 18.6 and 18.7) . 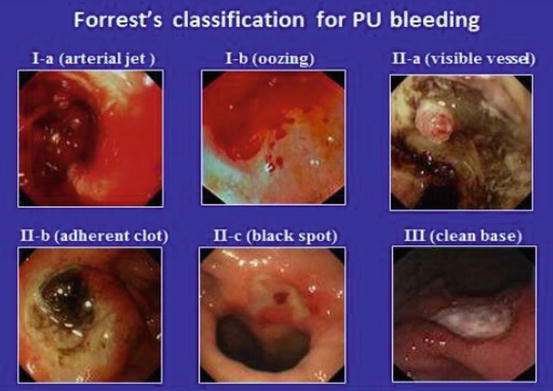 Endoscopic findings as predictors of clinical outcome [26]
There are several endoscopic therapy options available for the management of bleeding peptic ulcers. These include injection therapy of epinephrine, coaptive coagulation, mechanical clip application, and use of hemostatic agents. Evidence strongly supports not using epinephrine injection in isolation but rather coupling it with a second endoscopic measure for improved outcomes [9].
Submucosal injection therapy allows fast but temporary reduction of acute gastrointestinal bleeding. An injection catheter is passed down the working channel of the endoscope into the field of view of the endoscopist. The needle is oriented tangentially to the mucosa at an angle of 20–70°. The target is to inject around the ulcer lesion, often in four quadrants, to achieve tamponade of the feeding submucosal vessel (see image below). Panels 1 and 2 show injection around the ulcer base with delivery of the injectate into the submucosa. Panels 3 and 4 highlight the completion of four-quadrant injection to complete the tamponade effect (Fig. 18.8).

Depiction of ulcer with submucosal blood vessel (panel 1). Injection adjacent to ulcer (panel 2) to achieve tamponade of feeding portions of the submucosal vessel. Injection into remaining quadrants around ulcer (panels 3 and 4), complete injection therapy
The mainstay of injection therapy is diluted (1:10,000) epinephrine. Several studies have shown that large-volume (greater than 13 cc) injection offers hemostatic benefit over small volume but may carry potential risk of arrhythmia and hypertensive crises [10–12]. The ideal injection solution remains to be clearly clarified. Some studies have shown similar bleeding outcomes with injection of distilled water or normal saline compared to epinephrine [13, 14]. This further highlights the notion that the main effect of submucosal injection is tamponade rather than vasoconstriction.
The delivery of coaptive coagulation is a well-established and widely used technique that is often coupled with submucosal injection. As mentioned above, dual endoscopic therapy (e.g., injection and thermal coagulation) is superior to injection monotherapy [15]. Thermal coagulation in the management of peptic ulcer disease strives to deliver coaptive coagulation. This entails mechanical pressure on the submucosal vessel to oppose the endothelial walls. Coagulation is then delivered to thermally seal the walls against one another and stop the blood flow. The thermal probe is passed down the working channel of the endoscope, and direct, firm pressure is applied to the base of the ulcer or visible vessel. Coagulation at 80 W is delivered through the probe while holding pressure on the ulcer base for 5–10 s. Water irrigation is then used to pull the probe off the ulcer base so as to limit sticking of the probe to the ulcer base. This can be repeated until a satisfactory result is achieved. Understandably, there is a risk of luminal perforation as the thermal coagulation is applied to the ulcer base [16]. This can be limited by direct endoscopic visualization of therapy application and limiting the force of pressure on the probe in the ulcer base (Fig. 18.9).

(a–d) Coaptive coagulation
Mechanical closure of bleeding peptic ulcers is a highly effective modality that, unlike injection therapy, can be used as a monotherapy [15]. The premise is to apply mechanical closure of the visible vessel or feeding vessel for hemostasis. Numerous clip options are available with the main design consisting of opposing surgical steel arms. The clip is passed in a closed format down the working channel of the endoscope. The clip is then opened by the endoscopy assistant and can be rotated (in most instances) into the ideal orientation, which is perpendicular to the direction of the blood vessel. The clip is advanced against the vessel and closed when the positioning is secured. Often, this will stop the bleeding instantly. The clip is then deployed from the delivery device. Most endoclips remain in position for 3–14 days (Fig. 18.10).

Mechanical closure of visible vessel with hemoclip
An over-the-scope clip (OTSC) (Ovesco Endoscopy) is a novel tool that can be used to manage large peptic ulcer bleeds [17]. This device, consisting of the clip anchored on an endoscopic flexible plastic cap, is loaded on the tip of the endoscope prior to insertion into the GI tract. Once the ulcer is visualized, an en face approach is obtained. The ulcer base and surrounding tissue can be pulled into the cap using different grasping tools and/or suction from the endoscope. Once the desired tissue is in the cap, the clip is deployed via a rotating knob system outside the body. This clip is felt to be more permanent as it grasps a larger amount of tissue than traditional endoclips .
The newest tool available for endoscopic management of acute non-variceal upper GI bleeding is a hemostatic powder, called Hemospray (Cook Medical Inc., Winston-Salem, NC, USA). While the exact mechanism of action is not known, this agent (along with others currently in development) is thought to increase the concentration of coagulation factors, activate platelets, and form a mechanical plug on the injured vessel [18]. It was initially felt to be a salvage technique in refractory bleeding cases that have failed conventional methods of endoscopic hemostasis therapy . However, more and more, it is being used as an early intervention given its high efficacy and relative ease of use [19]. The delivery catheter is passed down the working channel of the endoscope. Care must be employed to have a dry working field, as any fluid will lead to the immediate coagulation of the powder. If this occurs prematurely, the delivery catheter can become occluded and will need to be replaced. Therefore, it is ideal to remain an adequate distance away from active bleeding, usually 3–5 cm. Once positioned, the powder is dispersed from the delivery catheter using a carbon dioxide propelling deployment system outside the body. The powder is dispersed in a wide field therefore making it relatively easy to target the bleeding site. The initial hemostasis results with Hemospray are quite promising, but more research into the robustness of this initial hemostatic effect and whether or not additional endoscopic therapies are required is still needed (Figs. 18.11, 18.12, 18.13 and 18.14). 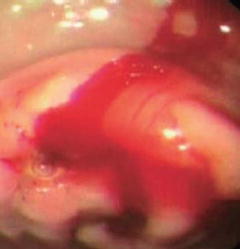 Tags: Treatment of Ongoing Hemorrhage The Art and Craft of Stopping Severe Bleeding
Mar 13, 2018 | Posted by admin in Uncategorized | Comments Off on Endoscopic Hemorrhage: This is Even Harder than the Laparoscope!
Premium Wordpress Themes by UFO Themes
WordPress theme by UFO themes