design and ergonomics of anesthesia machines

In this chapter, we will discuss things in generalities because not all anesthesia machines will operate the same way in case of a power outage. When electrical power is lost, what may work on one model of machine may not work on another model even from the same manufacturer. We will discuss the basic components of the electrical system of an anesthesia machine and what to do in the event of a power loss during an anesthetic.

The basic components of the electrical system of an anesthesia machine include a master switch, electrical outlets, circuit breakers, and (in most cases) a backup power source. The most modern machines also have data ports that allow information to pass between the machine display and various monitors. 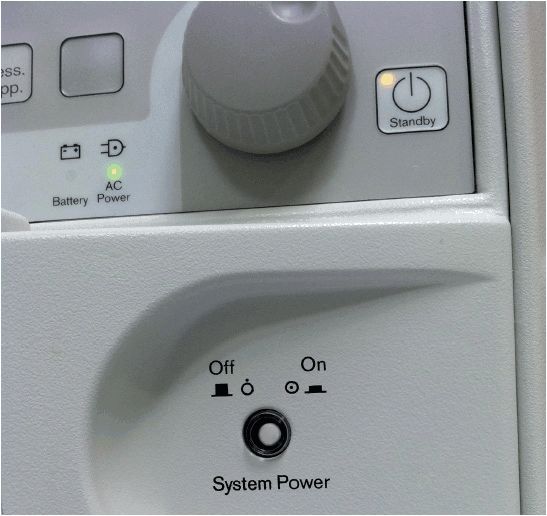 Master switch on a Draeger Apollo anesthesia machine. When engaged, both the electrical and pneumatic systems become operational. Note the AC power and battery icons in the upper left of the figure; AC (wall outlet) is supplying power in this case (the AC icon is lit).

It seems, however, that the presence of these outlets is a powerful attractant to other operating room (OR) personnel. Even the baby-proof plug-in shields are not a deterrent. Imagine there is someone trying to find a place to plug in a cautery machine, or a warmer, or the OR table, or the patient bed. “Hey, there’s some plug-ins right back here on the anesthesia machine!” they think. With no malice intended, they plug in whatever they want to plug in, and at some time during the case, suddenly and with no warning, your anesthesia machine goes dead—the ventilator just stops. Your monitors go dead, too, if they are part of the machine or plugged into the back of the machine.

At some time in your career, this will happen to you. It has happened to the authors multiple times. You need to know immediately how to troubleshoot and figure out the problem. You may say, “But doesn’t the machine have a battery backup?” Maybe it does, and maybe it doesn’t. You’d better find out. One of the authors had anesthesia machine power loss with a machine that had an internal battery backup. The battery, it turned out, was old enough that it didn’t hold a charge. It was a model of machine that did not show a screen icon indicating proper battery function.

In the case of a machine that does have an auxiliary power source, the machine will let you know by visual and auditory cues that you are not on backup power.

In this situation, not only do you need to know how to fix the problem, you also need to know what functions of the machine are going to work while you are fixing the problem; more on that later. Never let anyone plug anything into your machine unless you are sure they know what they’re doing.

Notice that we said to find out not only if anything was plugged into the back of your machine, but also the last thing plugged into any outlet in the room and the last electrical device used in the room. There are a lot of things that draw a lot of current, and your machine circuit breakers can trip from something else in the room that is in use. Furthermore, we have seen a case when the machine died while the nurse still had her hand on the plug behind the machine, and we have seen a case when the fluoroscope that a surgery resident plugged into the back of the machine without our knowledge had been in use for about an hour before the machine died. A situation like this is one when extra hands and brains are necessary. Someone has to care for the patient while the mess is being straightened out.

Most modern anesthesia machines have a battery backup in the event electrical power from the wall is lost. Most also have some type of icon or message that tells the operator the percent charge on the battery and if the battery is actually in use. For machines that do not have a battery backup, reserve or auxiliary power units (APUs) are available for use. These are readily available and can be easily attached to an anesthesia machine, and they will last a longer period of time than the built-in backup power source would last if electrical power is lost.

How long will your backup battery last? That question depends on several variables such as the type of battery, use of mechanical ventilation, how many systems in the anesthesia machine are dependent on electricity, if patient monitors are using the same battery, and so forth. Depending on these variables, the machine, and the battery, the time period can be anywhere from half an hour to 2 hours. It is your responsibility to find out approximately how long the machine or machines you use can last on their batteries.

SO WHAT WORKS WHEN ALL THE POWER IS GONE?

Again, that question depends on the machine. Most machines (we know we have said “most machines” quite a bit in this chapter, but there are a lot of different models of anesthesia machines out there, and they are not all the same), even with their modern complexities, are still designed to be able to deliver oxygen to a patient as long as the master switch is turned on and there is a source of oxygen attached to the machine. The circle circuit still works, the reservoir bag still works, the adjustable pressure-limiting (APL) valve still works, the unidirectional valves still work, and the carbon dioxide absorber still works. Therefore, you can ventilate a patient manually, or the patient can breathe spontaneously. Again, we said “most machines.” You really need to find out for yourself what your specific machine would do without electricity.

Do the flowmeters still work? If your machine has standard glass, Thorpe tube flowmeters with nonelectronic controls and knobs you turn instead of electronic selection, they probably do. What about machines with “virtual flowmeters” (flowmeters on an LCD screen)? Maybe. For instance, the Draeger Apollo, which has virtual flowmeters, still has a small glass Thorpe tube flowmeter on the front of the machine under the LCD screen for use if the screen goes dead. It measures all three gases, not just oxygen, but it does give you an indication of the flow rate through the machine, so it would be better to use only oxygen in such a situation. The flowmeter control knobs on the Apollo are mechanical.

How would you keep the patient anesthetized? You could switch from inhalational to an intravenous technique if you had been using the vaporizers. But would the vaporizers still work? Probably, yes. If the vaporizer was a standard variable bypass flow-over type that required no electricity in the first place, the answer is yes. If it is a desflurane “vaporizer,” the answer is no because we know that the desflurane vaporizer needs electricity to heat and pressurize the agent, plus relies on electronics to inject the liquid into the fresh gas flow. Also, Maquet injection-type units would not work. Plus, the vaporizer system on the Ohmeda ADU with its external cassettes and internal vaporizing mechanism will not function without electricity. The ADU needs power for its flowmeters also. At our institution, we have some ADU machines and auxiliary power units are installed on each one.

FUNCTIONS OF A STANDARD ANESTHESIA MACHINE NOT NEEDING ELECTRICITY TO FUNCTION

This is provided the master switch is in the “on” position.