The patient has fallen, has been thrown against an object, or has been struck on his or her body. Though the initial pain has subsided, there continues to be point tenderness, swelling, ecchymosis, hematoma, or pain with use. On physical examination, there is minimal or no loss of function of muscles and tendons (beyond mild splinting because of pain), no instability of bones and ligaments, and no crepitus or tenderness produced by remote stress (such as weight bearing or axial compression on the leg or manual flexing of a rib) (Figure 137-1). 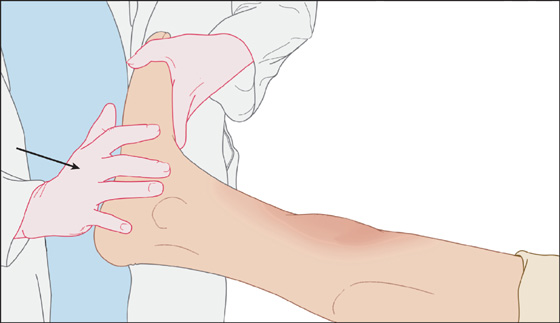 Common sites of painful bruising are the shin, iliac crest (“hip pointer”), and anterior thigh (quadriceps). Contusions are often sports related. Patients often seek medical attention for trivial injuries after being struck by an object because of initial severe pain, growing discoloration of the skin, worsening swelling, fear of an underlying fracture, or secondary gain after an altercation.

Take a thorough history to ascertain the mechanism of injury, and perform a complete examination to document structural integrity and intact function. Determine if there is a history of bleeding problems or if the patient is taking any medications that increase the risk for hemorrhage (e.g., aspirin, warfarin).

Document neurovascular status and range of motion of an injured extremity. Examine surrounding areas to identify other possible injuries.

Ecchymosis and/or swelling out of proportion to the mechanism of injury warrant an investigation of possible bleeding disorders (e.g., hemophilia, idiopathic thrombocytopenia, leukemia) as well as abuse. Bruises in the shape of an instrument (e.g., belt, extension cord) generally are diagnostic of abuse. Patterned bruises can also be caused by coining and cupping, which are innocent cultural remedies employed by traditional Asian families.

Suspected domestic, elder, or child abuse should be reported immediately to the appropriate authorities.

With an extensive muscle contusion, consider looking for secondary rhabdomyolysis.

Reserve radiographs for possible foreign bodies and bony injury. Fractures are uncommon after a direct blow but are suggested by pain with remote percussion, stressing of bone (i.e., applying torsion), or an underlying deformity or crepitus. The yield is very low when radiographs are ordered on the basis of pain and swelling alone.

Explain to the patient that swelling will peak in 1 day and then resolve gradually. Also inform him that swelling, stiffness, and pain may be reduced by good treatment during the first 1 to 2 days. Continued swelling, especially after a thigh contusion, should be investigated for a possible enlarging hematoma.

Recent controversial data on the use of ice and nonsteroidal anti-inflammatory drugs (NSAIDs) for the treatment of contusions may lead a clinician to assume that there is no proven dogma when it comes to treating this mostly self-limited condition. RICE therapy remains a reasonable and still generally accepted approach to managing contusions.

Ice (usually an ice bag, wrapped in a towel and applied to site of injury for 10 to 20 minutes every 1 to 3 hours for the first 24 hours). Ice should not be applied directly to the skin.

Compress, if possible (using an Ace wrap), by adding light pressure to reduce swelling. Compression should not be too tight, because this may cause numbness or increased pain.

Elevate the affected part—ideally, above the level of the heart to reduce swelling by allowing fluid to drain from the affected area.

Provide appropriate analgesia. (Acetaminophen with or without hydrocodone may be the best choice; NSAIDs are not likely to cause any problem if used only for the first 2 to 3 days.)

Elderly patients with pretibial hematomas who are on drugs that promote bleeding (e.g., warfarin, aspirin) can develop pressure necrosis of the overlying skin. With surgical consultation, large hematomas should be evacuated. One technique is to perform a hematoma block with lidocaine, after which a sterile Yankauer suction cannula is inserted through a stab incision overlying the hematoma. The hematoma is then evacuated by wall suction, using a to-and-fro movement of the cannula. The cavity is irrigated with normal saline, the incision is left open or repaired with a tape closure, and then a compression dressing is applied to the lower leg. Follow-up should be arranged within 2 days.

If a significant hematoma is present with a hip pointer (iliac crest contusion), patients will present with pain over the iliac crest and may have difficulty ambulating and may have a fluctuant mass over the area, resulting from the hematoma. Aspiration of this hematoma can provide some pain relief and help prevent development of myositis ossificans or compression of the lateral femoral cutaneous nerve. This should be accompanied by surgical consultation, radiographs to rule out an iliac fracture, and follow-up. Injection of a long-acting local anesthetic (e.g., bupivacaine) may provide short-term pain relief. Plain radiographs are essential to rule out fracture or apophyseal avulsion in the skeletally immature patient. If left untreated, this condition can lead to periostitis or the formation of bone exostosis. Crutches can be used if weight bearing on the affected leg is painful.

For a quadriceps contusion, immediately putting the knee in 120 degrees of flexion tamponades further hemorrhage and limits muscle spasm. This hyperflexion can be maintained by wrapping the knee in this position using 6-inch Ace bandages. A figure-eight pattern will be most effective. Crutches will be required, because the wrapping should be kept in place for 24 hours. Myositis ossificans traumatica (ossification in muscle with fibrosis, causing pain and swelling) occurs in approximately 9% of patients with quadriceps contusions 3 or more months after initial injury. Therefore large intramuscular hematomas or the inability to passively flex the knee more than 70 to 80 degrees, or both, requires orthopedic consultation to consider surgical evacuation. MRI has the highest sensitivity and specificity for a suspected soft tissue hematoma.

Other issues that should be considered in the patient with multiple ecchymoses are conditions that result from frequent falls, such as substance abuse and neurologic, metabolic, and infectious abnormalities often seen in the elderly.

Patients with minor contusions not requiring radiographs can be reassured and informed that you do not want to expose them to any unnecessary radiation.

Explain to the patient about gravitational migration and possible color changes of ecchymosis. Do this so that when green, purple, or yellow discoloration appears farther down the limb in the days following the injury, the patient is not frightened into thinking that he has another injury or complication.

Arrange for reevaluation and follow-up if there is continued or increasing discomfort or swelling. Large muscular contusions may require physical or occupational therapy until full function has returned.

Do not apply an elastic bandage to the middle of a limb, where it may act as a venous tourniquet. Include the entire distal limb in the wrapping if a compression dressing is necessary.

Do not recommend the use of heat. During the first 24 to 48 hours, this may lead to increased hemorrhage and edema. After 48 hours, the literature shows it to be of limited benefit.

Do not use corticosteroids to help decrease inflammation, because these medications have been associated with unwanted atrophy of both affected and unaffected muscles.

Do not take for granted that all patients understand what is meant by RICE therapy. Make sure that patients understand the treatment regimen to avoid prolonging or worsening their conditions. For example, prolonged, direct application of ice packs can lead to frostbite-type injuries.

Contusions are caused by blunt trauma to the skin and underlying soft tissues, resulting in tissue and cellular damage and bleeding within the various tissue planes. Bruising or ecchymosis consists of visible blood that is infiltrating into the subcutaneous interstitial tissues.

Resultant tissue necrosis and hematoma lead to inflammation. This inflammatory response is often thought to be detrimental; however, some literature indicates a worsened long-term outcome of muscle contusions in patients placed on anti-inflammatory medications. Controversy also surrounds cryotherapy, with some literature touting its benefits and others questioning its usefulness.

The acute therapy of contusions concentrates on reduction of the acute edema; all other components of rehabilitative treatment are postponed until the pain, inflammation, and edema are reduced. Patients need to know this course and must understand that the more the swelling can be reduced, the sooner the injuries can heal, the function can return, and the pain will decrease. Edema of hands and feet is especially slow to resolve, because these structures usually hang in a dependent position and require much modification of activity to rest and elevate. Early mobilization with minor contusions assists in a speedy recovery.

Abuse of children and the elderly is common and must be considered in any patient presenting with a contusion. Rates of abuse are generally underreported, but are noted to be higher in minority children, especially with risk factors such as young or single parents, unstable family situations, and lower levels of education. Although accidental bruising tends to occur in a predictable distribution (shins, chin, forehead, lower arms, hips), bruising associated with abuse may be clustered and often involves the face, ears, head and neck, trunk, buttocks, and arms. The distribution may suggest defensive injuries (ulnar aspect of arms and lateral aspect of the thighs). Handprints, oval finger marks, belt marks (long, broad bands of ecchymosis that may end in a horseshoe-shaped mark caused by the buckle) or loop marks (from doubled-up wire, rope, or extension cords) should raise suspicion for abuse-related injuries and merit a more detailed evaluation and physical examination. Bite marks (intercanine distance of 2.5 to 3 cm suggests adult teeth) or multiple bruises in various stages of healing also merit more detailed evaluation.

Bear in mind that injuries in domestic violence are usually central and in areas covered by clothing (e.g., chest, breast, abdomen). The face, neck, throat, and genitals are also frequently the site of injury. Defensive injuries are also commonly observed.