Patients with bug or insect bites seek medical help, because they are miserable with itching or secondary infection, or they are fearful of being infected with tiny creatures or exposed to a serious illness.

Skin lesions generally consist of single or multiple pruritic wheals or papules, which may include excoriations from scratching (Figure 162-1). 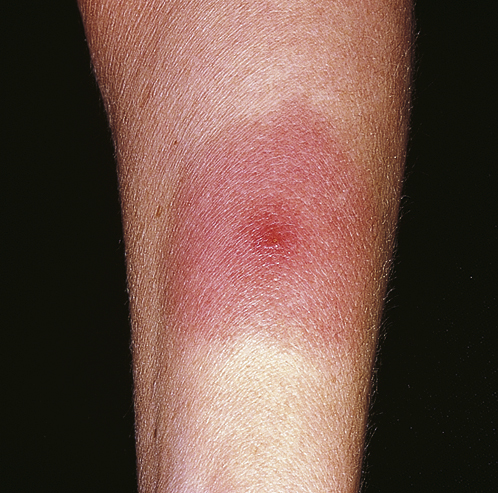 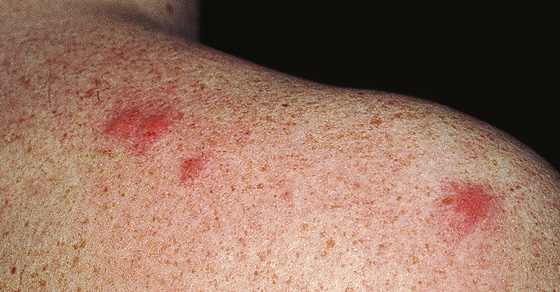 In tropical and subtropical regions of developing countries, as well as in hovels, homes, and high-class hotels throughout North America and Europe, bedbugs (true bugs) come out of hiding when their victim has retired to bed. The bites are painless, and unlike lice, the bedbug does not remain on the body after feeding. Bites are usually multiple and may be arranged in an irregular linear fashion. The wheals and papules that are formed have a small hemorrhagic punctum at the center. Blood that oozes from the wounds may be seen as flecks on the bed sheets. Bullous reactions are not uncommon (Figures 162-3 and 162-4). There is an apparent recrudescence of bedbugs in the United States recently. They are hard to avoid, because they may survive months, even in apparently hygienic circumstances. Avoiding residences with frequent turnover (shelters, hostels, etc.) may be prudent but perhaps impossible. Permethrin-sprayed bedclothes or sheets may be effective in prevention. 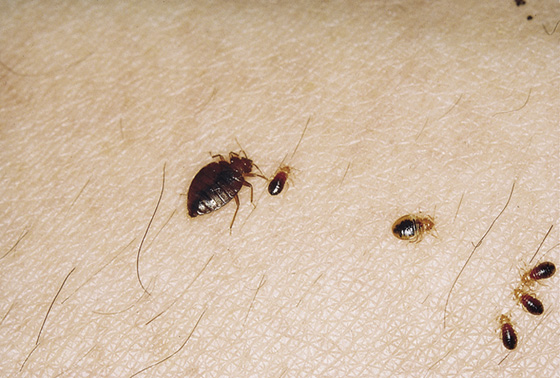 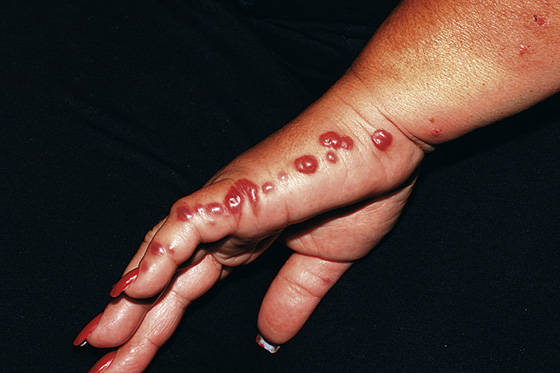 Kissing bugs (also true bugs) are found in the southwest United States, especially from Texas to California. These large (3 cm in diameter) winged insects are brown to black, with small stripes of red or orange in some species. The bites of these nocturnal insects occur almost exclusively in rural areas. The painless bite occurs only while the host is sleeping, because the blood meal takes 10 or more minutes to complete. Bites have been associated with papular, urticarial, and bullous reactions; hemorrhagic wounds that resemble bites of the brown recluse spider have also been reported.

Fleas are small (3 mm long), wingless bloodsuckers capable of jumping to a height of 7 inches. Flea saliva is highly antigenic and is capable of producing a pruritic papular rash. Cat and dog fleas also readily bite people, and therefore, pets infested with fleas are generally the source of the human rash (Figure 162-5). 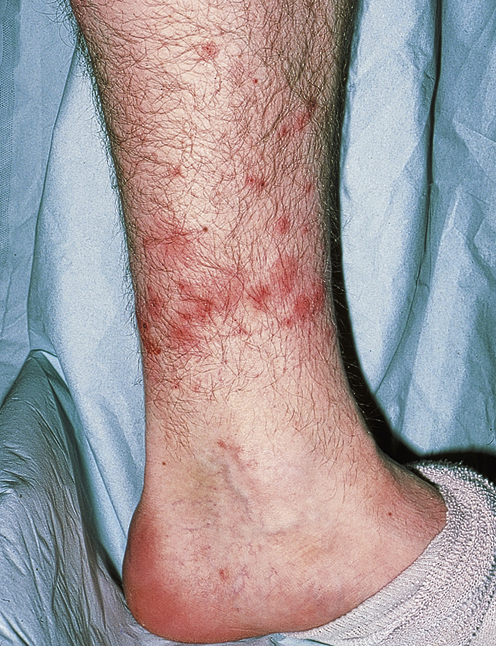 Chigger bites are caused by the harvest mite or red bug, which commonly is found in grasslands of the southeastern United States. The larval form of the mite attaches to the patient’s skin (usually during summer and fall) and sucks up lymph and tissue dissolved by the mite’s proteolytic saliva. Frequently, the only signs of exposure are intensely pruritic, 1- to 2-mm papules on the ankles, legs, or belt line, because the bright red mites typically fall off after feeding. The erythematous papules may persist for up to 3 weeks.

A common hypersensitivity response to arthropod bites (most often caused by fleas or bedbugs) is papular urticaria. The condition consists of small, 3- to 10-mm pruritic urticarial papules that are present on exposed areas and affect predominantly children between the ages of 2 and 7 years. The papules form in clusters and are characteristically distributed on the extensor surfaces of the arms and legs. The lesions generally persist for 2 to 10 days and may result in temporary hyperpigmentation once they resolve.

Caterpillars have hairs (setae) with irritant and allergenic properties that can cause stinging pruritic erythematous papules, often arranged in linear streaks. Symptoms last a few days to 2 weeks. Whereas pruritus is characteristic of caterpillar dermatitis, the hallmark of the sting of the asp or puss caterpillar is intense pain out of proportion to the size of the lesion produced. A characteristic train-track pattern of purpura often appears at the site of the sting (Figure 162-6). The range of the puss caterpillar is from Maryland down the eastern seaboard to Florida and across the states bordering the Gulf of Mexico. 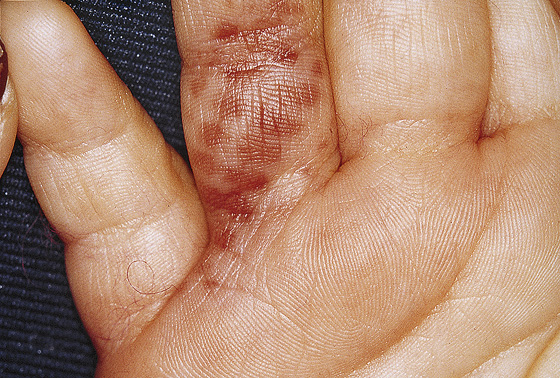 Take a careful history that includes any underlying medical conditions or medications that might produce a papular rash. Also perform a physical examination that provides a detailed description of the rash and its distribution. Attempt to uncover specific circumstances of biting arthropods, from the patient’s history as described previously.

Pruritic lesions can be treated with local application of mild to moderate topical steroids (hydrocortisone cream 1% to 2.5%).

An antipruritic, such as hydroxyzine (Atarax, Vistaril), 25 to 50 mg qid, may be comforting.

Treat any infectious complications with appropriate topical or systemic therapy (see Chapters 163, 166 and 172).

Mosquito bites and other fly bites can be prevented outdoors by covering exposed skin with clothing and by the use of insect repellents on skin and clothing. Clothing is most protective if it has a tight weave and is loose and baggy. Diethyltoluamide (DEET) remains a highly effective repellent. The American Academy of Pediatrics recommends concentrations of 30% or less in products intended for use in children. DEET (Ultrathon) 25% (in aerosol) or 33% (in cream) is a polymer formulation that provides complete protection against mosquitoes for 6 to 12 hours. DEET can be sprayed on clothing, but permethrin, in a formula that can be sprayed on clothing (Duranon, Permanone), remains effective for several weeks through at least 5 or 6 launderings and can be used in combination with DEET for increased protection. A 20% solution of Picaridin has recently become available in the United States. It is tolerated better than DEET and will probably replace DEET in the future (see Discussion, this chapter).

Using permethrin-impregnated mosquito nets while sleeping can be helpful when rooms are not screened or air-conditioned. “No-see-ums” and sand flies are biting flies that are small enough to pass through the mesh of standard window screens and mosquito nets, but they may be blocked with fine-mesh screens or with ones that have been treated with permethrin.

Eradication of bedbugs often requires protracted and costly treatments for the infested premises.

Fleas must be eradicated from the environment to effectively end the problem of flea bites. Eliminating cat and dog fleas depends on treating the animal hosts and premises, not the transient human host.

To prevent chigger bites, your patient should avoid sitting or lying in grass or weeds in the warm months of the year. Using DEET or spraying clothes with permethrin will also help.

Caterpillar dermatitis may require moderate- to high-potency topical steroids to help alleviate itching in some cases. Systemic steroids should be reserved for severe reactions. Caterpillar hairs (setae) can be removed from the skin by “stripping” with adhesive tape, or, at home, have the patient apply nontoxic household glue (such as Elmer’s Glue, not Krazy Glue) with a cotton swab and top it with a single layer of gauze. Instruct him to let the glue dry, then remove the gauze and glue. The setae will usually come out with the glue and gauze. Alternatively, the patient can use blackhead-removal strips (e.g., Bioré), following the same directions they would use to remove blackheads.

Intractable pain caused by the sting of the puss caterpillar may require oral or parenteral narcotic analgesics.

Do not mistake the multiple painful nodules of erythema nodosum for bug bites (Figure 162-7). These erythematous nodules are not pruritic and usually develop over the anterior legs, occasionally over the torso, and infrequently over the extensor surfaces of the arms. This condition requires a special medical investigation. 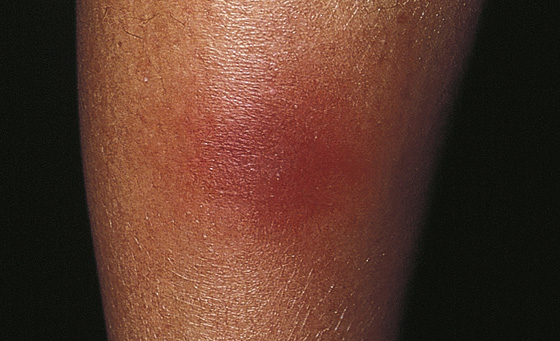 Do not recommend antihistamine creams. They are probably of no value and can irritate the skin.

Do not recommend non-DEET insect repellents (excluding Picaridin). They provide little if any protection. An exception is the current availability of permethrin sprays as mentioned above. They may be viewed as complementary to DEET applications, but are likely more helpful at protecting against ticks or bugs that may stay hidden in clothing.

Do not apply DEET near eyes or mouth, on broken skin, or under clothing.

In general, the diagnosis of arthropod bites is dependent on maintenance of a high index of suspicion and familiarity with the arthropod fauna, not only in one’s region of practice but also in the travel regions of one’s patients. Taking a thorough history and determining the distribution of the rash will aid in the diagnosis.

Mosquitoes are responsible for the recent outbreaks of West Nile virus in the United States. West Nile fever develops in approximately 20% of infected humans and is accompanied by a flulike illness. A rash occurs in 20% of patients. Fortunately, severe neurologic manifestations of West Nile fever, including meningitis and encephalitis, are rare. Patients should be so informed and reassured.

Bedbugs are spread chiefly through the clothing and baggage of travelers and visitors, secondhand beds, and laundry.

DEET has been found to be safe and effective, but some patients dislike its odor and find it irritating or uncomfortably oily or sticky on the skin. DEET can damage clothes made from synthetic fibers, such as spandex or rayon, and can also damage leather and plastics on eyeglass frames and watch crystals. Sawyer Premium Insect Repellent 20% Picaridin (3-oz spray) is now available on the internet in the United States. It is recommended as an alternative to DEET. Unlike DEET, it is odorless, does not feel greasy or sticky, is less likely to irritate the skin, and does not damage plastics or fabrics. Picaridin should now replace DEET because of its superior tolerability.