Occasionally patients will come in with a dead or captured spider after having rolled over it in bed or finding it in their clothing while dressing. They may have felt a minor pinprick sensation or no discomfort at all. Early, there may be mild erythema at the suspected bite site. Burning pain, pruritus, and swelling may develop within a few hours of the bite.

More commonly, patients come in with a raised erythematous painful lesion with central vesiculation, possibly hemorrhagic, or a darkened or bluish area of early skin necrosis. The patient or a friend or relative suspects that this might be a “spider bite,” even though a biting spider was never observed.

True brown recluse spider bites vary from mild local reactions to severe ulcerative necrosis with eschar formation (necrotic arachnidism) (Figure 161-1, A and B). The bite often appears as a central blister with mottling and a blanched halo, with surrounding erythema that sometimes makes it look “red, white, and blue.” Bites usually are found under clothing and on the thigh, lateral torso, or upper arm. They are uncommon on the neck and are rare on the hands, feet, or face. Transient and mild constitutional signs and symptoms, such as myalgias, malaise, fever, chills, nausea, vomiting, generalized rashes, and headaches, may accompany these bites. A small subset of patients can have a more severe systemic response. 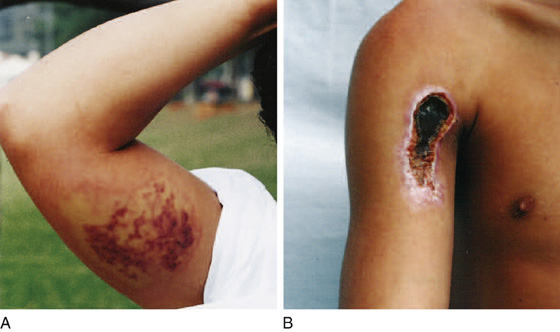 Lesions from other arthropod species and a variety of medical conditions may mimic bites of the brown recluse spider.

Ask about the conditions that existed that would raise suspicion for an arachnid bite.

Determine whether there have been personal contacts with individuals having similar lesions or if the lesions are purulent and consistent with community-acquired methicillin-resistant Staphylococcus aureus (CA-MRSA) infection. Today, most patients presenting with the complaint of a “spider bite” and who do not have direct evidence of such a bite are actually presenting with a CA-MRSA infection (see Chapter 163). Culture suspicious lesions, and provide appropriate antibiotic coverage.

Cleanse the bite site, and thoroughly irrigate any open wound.

When there is suspicion that a spider bite has actually occurred, provide and recommend cold compresses, immobilization, and elevation.

Confirmed bites are defined as bites associated with a captured or recovered spider found in close proximity to the bite and correctly identified by a qualified person. Most confirmed bites require no treatment and resolve without incident.

Provide antibiotics for any secondary infection. True brown recluse spider bites only infrequently become infected; therefore prophylactic antibiotics have not been found to be useful.

Systemic symptoms in the very young and very old most often require admission, and severe symptoms or extensive necrosis in any patient requires admission.

Patients with mild to moderate local findings can be managed as outpatients with close follow-up in 24 to 48 hours.

Warn patients of the potential for skin necrosis, with resultant scars requiring possible surgery. The absence of a lesion 2 to 3 days after the bite usually indicates that necrosis will not develop. Necrotic wounds can take weeks to heal, the average time being 15 days (range, 0 to 78 days). Appropriate referral to a general or plastic surgeon should be considered.

Do not apply heat or recommend hot compresses to suspected spider bites. Application of heat to these wounds results in more severe damage.

Do not inject the wound with antihistamines, corticosteroids, and/or vasodilators. This has not been shown to be of any benefit.

Do not perform early skin excision or débridement. Any débridement and/or skin grafting should be delayed until the wound has stabilized (6 to 8 weeks).

Throughout the United States, dermonecrotic wounds of uncertain cause are often attributed to the brown recluse spider, Loxosceles reclusa. Many such diagnoses occur in parts of the country where the spider is not native and its populations are not known. The brown recluse has a fairly limited range (see map, Figure 161-2). Even inside endemic areas, these bites are very uncommon. Unfortunately, this spider has gotten a lot of press and has thereby inspired a lot of fear in the general population. 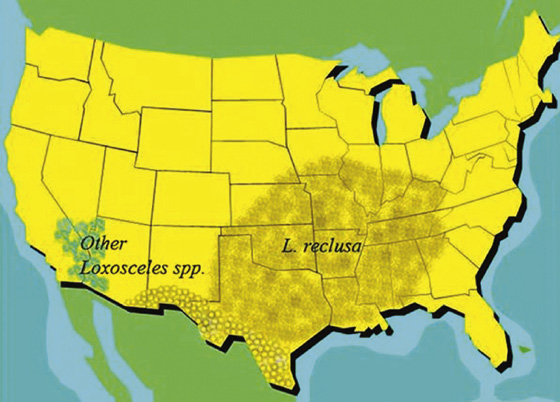 Necrotic wounds can be caused by many different factors. Today, patients frequently present with CA-MRSA skin infections that they have self-diagnosed as a spider bite. Misdiagnosing a necrotic wound as a brown recluse spider bite can lead to delays in appropriate care, with adverse outcomes. In general, spider bites have been overdiagnosed as the cause of necrotic lesions. In addition to CA-MRSA, other important misdiagnosed conditions include neoplasms, Lyme disease (see Chapter 180), cutaneous anthrax, gonococcemia, and perhaps the worst case scenario—necrotizing fasciitis.

Corroborative evidence should be sought before attributing the cause to a spider or other arthropod bite. Although general wound care may be sufficient for most similar wounds, it will be ineffective for conditions such as CA-MRSA, neoplasms, Lyme disease, cutaneous anthrax, gonococcemia, and necrotizing fasciitis, in which case a delay in treatment can have grave consequences.

Although all spiders are harmful to their prey, few are dangerous to human beings, and even fewer are capable of causing significant morbidity or mortality.

The brown recluse is a nonaggressive spider and will seek out shelter in undisturbed places, such as attics, closets, and storage areas for bedding and clothing. Humans may be bitten after donning clothing that has recently been taken out of storage.

Loxosceles spiders are the only globally distributed arachnid species capable of causing necrotizing skin lesions. Rarely, a more severe systemic reaction can occur, causing hemolysis, with subsequent renal failure and significant morbidity. There is no definitive treatment. Diagnosis remains difficult at best, with no specific test available to ensure that a lesion is attributable to the bite of a brown recluse.

Loxosceles reclusa has several distinguishing characteristics that may not be visible without magnification. The dark-colored violin-shaped markings on the dorsal aspect of the cephalothorax (hence the name “fiddleback”) (Figure 161-3) may not always be visible because of the variable color of the spider. A helpful identifying feature is the presence of six eyes arranged in three pairs (dyads) as opposed to the more common eight eyes found in most spiders. 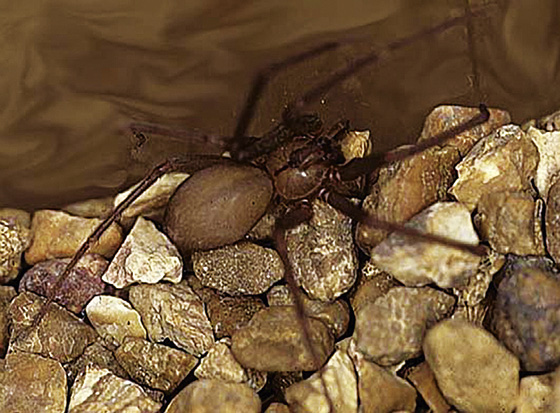 The current mainstay of therapy is supportive care. Even in the rare case of a confirmed bite, treatment should be expectant. Despite multiple trials, early surgical excision, electric shock, steroids, hyperbaric oxygen therapy, colchicine, antihistamines, vasodilator drugs, anticoagulants, prophylactic antibiotics, and dapsone remain unproven therapies for brown recluse envenomation. All have variable degrees of risk. Antivenin and specific Fab fragments have been shown to be of some benefit but are not available commercially. Furthermore, given the inaccuracy of brown recluse bite diagnosis, much better documentation of the cause than is usually available would be required before assuming the risk of administration of these agents.

In areas of high Loxosceles density, the public should be educated about avoidance of bites (inspecting clothing and bed linen) and should be reminded to bring the suspected organism for identification, even if crushed. Should a person find a spider on himself or herself, it should be brushed off, not crushed.

Like the brown recluse, the maligned black widow spider (most commonly Latrodectus mactans) is a shy creature that bites only when provoked. Most of the 26 species of widow spiders are jet black and often can be identified from their characteristic red “hourglass” marking on the undersides of their abdomens. Because webs can be found around outdoor toilet seats, bites may occur on or near the genitalia. These bites may be painful but are usually associated with only mild dermatologic manifestations. Black widow venom causes depletion of acetylcholine at motor nerve endings and release of catecholamine at adrenergic nerve endings. Consequently, black widow bites may produce agonizing abdominal pain and muscle spasm, which may mimic acute abdomen. Other signs and symptoms include headache, paresthesias, nausea, vomiting, hypertension, and sometimes paralysis; fortunately, death is not common. Black widow bites may be misdiagnosed as drug withdrawal, appendicitis, meningitis, or tetanus, to name a few conditions. Treatment is supportive, with intravenous opioids for the pain and a muscle relaxant for the spasms. Wound care is usually minimal. At one time, calcium gluconate was recommended, but it has now been shown to be ineffective.

Equine-derived black widow antivenin is the only nonsnake antivenin approved in the United States. It is highly effective, even when given late. However, it has also been reported to cause hypersensitivity reactions. In one case series of 163 bite patients, 1 of the 58 treated patients died of bronchospasm. Therefore some experts will never use antivenin, whereas others may give it only for severe cases, when the patient is very old or very young.

With the increasing trend toward having exotic pets, a practitioner may find a patient presenting with a tarantula bite. While dramatic in size and appearance, these patient spiders are not likely to bite, and their envenomation is generally no worse than that of a hymenoptera sting. Several species do have irritant hairs on their abdomen, which they may fling outward, causing cutaneous or ophthalmic irritation.