A toddler who is between 1 and 4 years of age has received a sudden jerk on his arm, causing enough pain that he holds it motionless against his body. Circumstances surrounding the injury may be obvious (such as a parent pulling the child up by the arm to avoid stepping into a puddle) or obscure (the babysitter who reports that the child “just fell down”). The patient and family may not be accurate about localizing the injury and think that the child has injured his shoulder or wrist. The patient is comfortable at rest, splinting his arm limply at the side with mild flexion at the elbow and pronation of the forearm. There should be no deformity, crepitation, swelling, or discoloration of the arm. There is also no palpable tenderness, except possibly over the radiohumeral joint; the child will start to cry with any movement of the elbow, especially attempted supination.

Rule out any history of significant trauma, such as a fall from a height.

Thoroughly examine the entire extremity, including the shoulder girdle, hand, and wrist. To avoid obtaining a false-positive examination, special effort should be made to keep the elbow joint perfectly immobile while evaluating for tenderness.

If there is significant trauma, point tenderness, swelling, ecchymosis, or any suspicion of a fracture, get a radiograph.

When nursemaid’s elbow is suspected, place the patient in the parent’s lap and inform the mother or father that it appears that a ligament in their child’s elbow is slightly out of place and that you are going to put it back in place. Warn them that this is going to hurt for a few moments.

Put your thumb over the head of the radius with your fingers supporting the elbow and press down with your thumb while you smoothly and fully supinate the forearm and extend the elbow. Complete the procedure by fully flexing the elbow while your thumb remains pressing against the radial head and the forearm remains supinated (Figure 98-1). At some point, you should feel a click beneath your thumb. The patient will usually scream for a while at this point. Leave for about 10 minutes, then return and reexamine the elbow to see that the child has fully recovered. This recovery may take as much as 30 minutes. Postreduction immobilization is unnecessary. 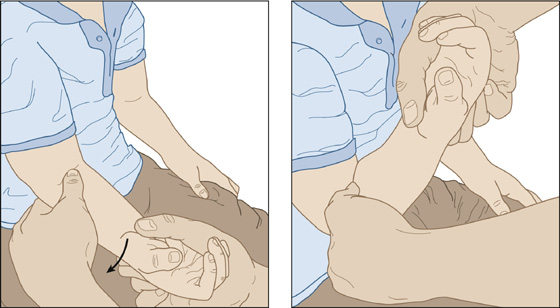 An alternative maneuver that some believe is more effective is the “handshake” or hyperpronation maneuver. Grasp the hand of the patient’s affected arm as if to shake it, place your other hand under the affected elbow with your thumb over the radial head, and slowly pronate the wrist. This can be done alone or while simultaneously extending the elbow, followed by fully flexing the elbow while still maintaining pronation of the forearm (Figure 98-2). 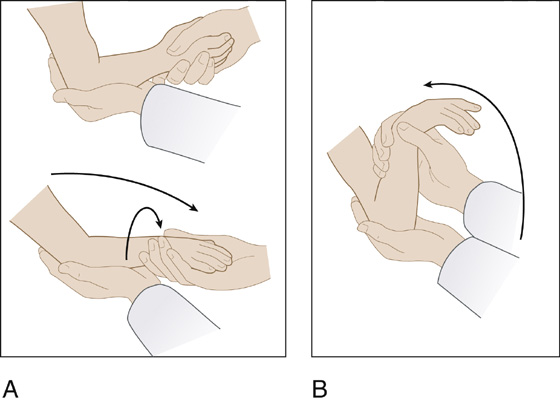 Figure 98-2 “Handshake” or hyperpronation maneuver. Simultaneous pronation of the wrist and extension of the elbow (A), followed by flexion of the elbow with the forearm maintained in pronation (B). (Adapted from Kaplan RE, Lillis KA: Recurrent nursemaid’s elbow [annular ligament displacement] treatment via telephone. Pediatrics 110:171-174, 2002.)

Initial attempts at reduction using either technique are usually successful.

Failure is more likely to occur if reduction is attempted 12 or more hours after the injury has occurred.

If there is not full recovery, a repeated attempt using the alternative maneuver may be warranted. If this is also unsuccessful, radiography should be obtained. Examine again for possible injury to the clavicle or humerus (particularly the lateral condyle), and consider other bone and joint disorders. Differential diagnosis includes fracture, soft tissue injury, infection, arthritis, tumor, neurologic injury, and vasoocclusive crisis in sickle cell.

Place these children in a sling, with or without posterior splinting. (The elbow should be kept at 90-degree flexion with as much supination of the forearm as comfort will allow.) Provide pediatric or orthopedic follow-up within 24 to 48 hours. Self-reduction almost always occurs during the period of immobilization.

When full recovery has been obtained, reassure the parents, explain the mechanism involved in the injury, and teach them how to prevent and treat recurrences.

Do not attempt to reduce an elbow where the possibility exists of fracture or dislocation.

Do not get unnecessary radiographs when all the findings are consistent with nursemaid’s elbow. The radiographs will appear normal.

Do not confuse nursemaid’s elbow with the more serious brachial plexus injury, which occurs after much greater stress and results in a flaccid paralysis of the arm.

Nursemaid’s elbow or annular ligament displacement (ALD), formerly called radial head subluxation (RHS), is a common pediatric orthopedic problem. It is most often seen in children who are between 1 and 4 years of age and is extremely rare in children who are older than 5 years of age. This displacement usually occurs as the result of a sudden forceful longitudinal traction on the hand while the forearm is pronated and the elbow is extended, as when one pulls the forearm of a resisting child.

The assessment of the young child is especially challenging, because the child cannot relate a coherent history, has difficulty localizing pain, and often is frightened and uncooperative, hindering physical examination. The classic history of a child being pulled up by the arm while falling or lifted by the arm is obtained in only 50% of patients. The diagnosis is nonetheless made by history and physical examination and confirmed by prompt reuse of the affected arm following reduction. Supination or pronation of the forearm usually causes reduction of the annular ligament back into its normal position. The reported recurrence rate involving either the same or contralateral arm is extremely variable, ranging from 5% to 39%.

ALD should be considered in any toddler presenting with arm injury without obvious evidence of trauma. The key to diagnosis is the observation that the child is not in pain; has no swelling, ecchymosis, or deformity; holds the elbow in a slightly flexed position with wrist pronated; refuses to use the arm; and resists supination. When history and physical examination suggest ALD, it is appropriate to attempt reduction without obtaining radiographs. Successful reduction is more likely when a click is felt. On occasion, if the injury has been present for several hours, edema, pain, and natural splinting will continue even after reduction or may prevent reduction.

Although not fully proven safe, parents or caretakers can be instructed by telephone to treat ALD, especially in those cases in which there is a previous history and in which the history is typical of recurrent ALD. Instruct the caregiver to restrain the child by placing her in a second adult’s lap and then have him grasp the child’s hand. With the treating adult’s other hand under the child’s affected elbow, straighten out the arm with the palm of the child’s hand facing upward. Then, have the child bend the elbow up, touching the palm of her hand to the same shoulder. After 20 minutes, the child should be moving the arm normally.